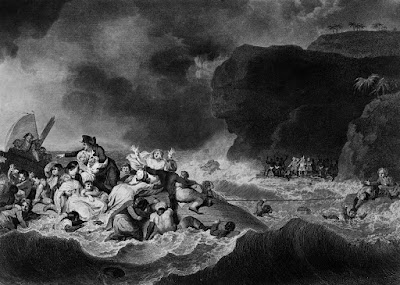 Grosvenor, an East Indiaman with 150 crew and passengers all told, struck onto the rocks of the Pondoland coast in South Africa early on the morning of August 4, 1782. Poor visibility and inaccurate navigation damned the ship. Despite their luck and a wretched morning of hauling themselves to safety by a line secured to the shore, most of the passengers and crew survived. Luck was not with the survivors, many of whom were killed by the arduous trek to Cape Town, or by the violence of locals. In the end, only eighteenth people reached safety. Of these, only three made it back to England.

Pollard does his best to convey the distress of the passengers and crew. 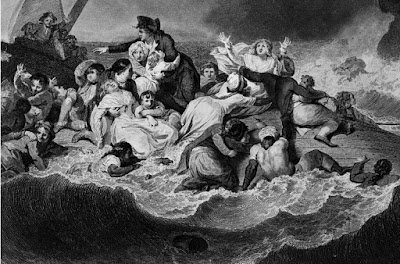 Mixed among the ladies in unbelievably white dresses, officers in frocks and cocked hats, and Indians in a variety of dress, are sailors clinging to the hull of the overturned and shattered Grosvenor. At the far left of the frame is a man in trousers, a short jacket that ends below the waist, and a round hat with an oval crown. Further to the center is a gentleman clutching a sailors, who holds to the hull for the both of them. This sailor wears a dark round hat with short brim, dark jacket, and a pair of petticoat trousers/slops. 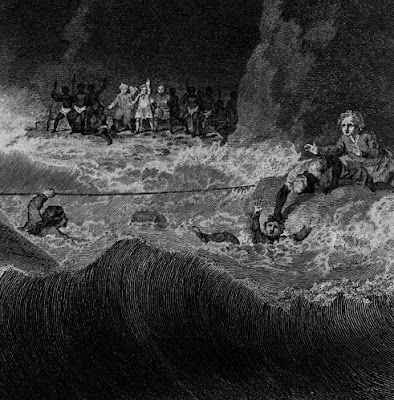 Ashore are a few more sailors. They also wear jackets and petticoat trousers/slops, but are largely hatless. The survivors stand amongst a collection of Bantu natives, the very people that they would fail so spectacularly to get along with on their 400 mile journey to Cape Town.
Posted by Kyle Dalton at 7:00 AM