A view of the procession of John Swan and Elizabeth Jefferies, c.1752 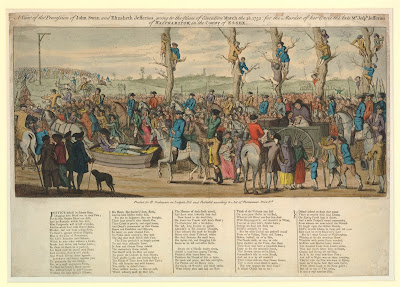 A view of the procession of John Swan and Elizabeth Jefferies, Bispham Dickinson, c.1752, British Museum.

The case of Elizabeth Jefferies and John Swan brings us pretty far from the Wooden World that is our usual focus. According to a tale related in the Newgate Calendar, John was Elizabeth's lover and an employee of Mr. Jefferies. The pair found out that Elizabeth's wealthy uncle planned to write her out of his will, and so attempted to pay off another employee to shoot Mr. Jefferies on their behalf. Though he initially agreed, the would be murderer backed out of the plan, despite the threats of John and Elizabeth to murder him as well. Undeterred, John shot Mr. Jefferies himself. Their plan almost worked, until the man they had hired to kill Elizabeth's uncle was caught and confessed to initially being part of the plot. Both Elizabeth and John were hanged on March 28, 1752.

Dickinson depicts the lovers being hauled away to the gallows in the print above. They are accompanied by a huge and diverse crowd of men, women, and children. Several professions can be made out in the crowd, including one sailor in the lower left corner of the frame. 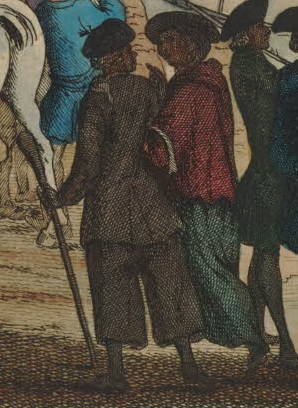 Arm in arm with a woman, our sailor strides alongside the sled that carried John Shaw to his doom. Our tar tears a rocked hat with a remarkably short brim over a bob wig. A white neckcloth is tossed over his left shoulder. His jacket runs down to just above his thighs, and a pair of petticoat trousers/slops hang down to about the middle of his calf. Pointed toe shoes and a walking stick complete his outfit.
Posted by Kyle Dalton at 7:00 AM