Admiral Anson's men in the dress of the Inhabitants of Payta, 1770 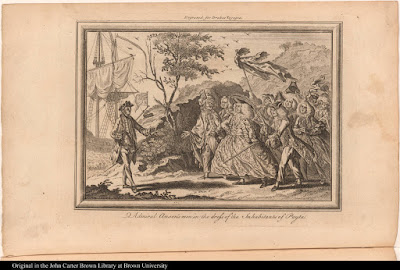 With a broad smile on his face, an officer (probably Anson himself) greets the return of his men from a successful raid. On the night of November 13, 1741, the crews of the Centurion and Carmelo rowed ashore and took the fort and town of Payta, Peru by complete surprise. The inhabitants were so thoroughly unprepared that the Spanish governor only escaped 'by jumping out of the window in his nightgown, fleeing to his comrades in the hills, and leaving behind his beautiful young bride who sat up in bed, shocked at the appearance of a young English officer.'[1]

According to the catalog entry at the John Carter Brown Library of Early American Images, 'the inhabitants fled without dressing, so that the sailors breaking into their houses, seized their clothes and paraded about in them.' 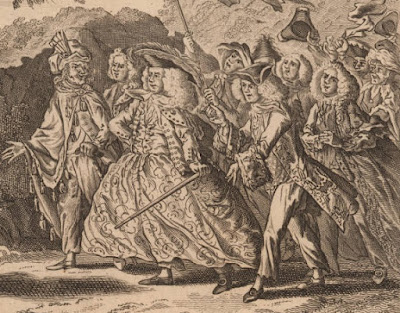 Beneath their pilfered clothes can be seen sailor's slop clothes: trousers and jackets without waistcoats. The jackets are worn with the slash cuffs open. The fellow with his fancy dress who parades up front wears a double breasted jacket over an embroidered waistcoat. To his left is a man in a turban wearing what appears to be a curtain over his own single breasted jacket. To their left is a sailor with a hug wig and embroidered frock coat with impossibly long cuffs. His is a cocked hat trimmed in white that he wears reversed.