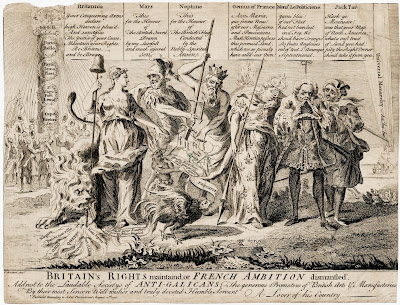 If you haven't visited Boston Rare Maps, you really should. There is an amazing collection of original printed images and maps that you can purchase. Definitely worth checking out.

Britain's Rights Maintained, a political cartoon by Boitard, was printed in the early days of the French and Indian War/Seven Years War. Another copy is held at the Library of Congress. His is an overly optimistic piece boasting about British victory well before it was assured. Indeed, 1755 left little for the British to celebrate.

Neptune himself points to a map of British North America, his finger resting on the border between New York and Quebec. Posturing with his trident as if to spear the French cock at his feet, Neptune declares "This for the Honour of the British Flag, Conducted by the Nobly-Spirited Anson." At this time, George Anson, hero of the previous war, was First Lord of the Admiralty. 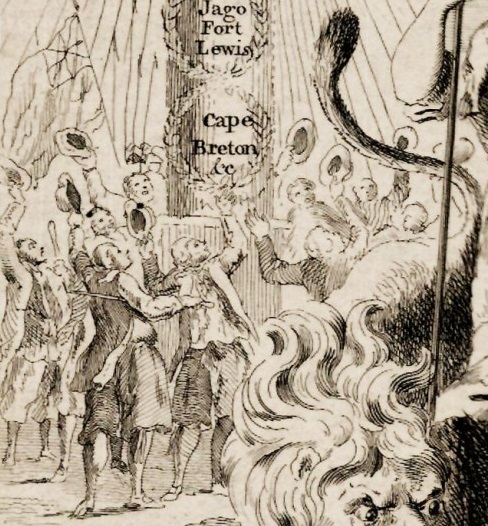 Behind the British lion on the far left, a group of sailors circle around a pillar to the triumphs of George II. They are uniformly dressed in petticoat trousers, and beneath two of them are visible long ribbons. These ribbons are either to fasten the breeches at their knees, or serve as garters for their stockings. The men wave round hats over their heads, and a couple appear to be wearing bob wigs. Their jackets end about the middle of the thigh, and a few carry sticks. 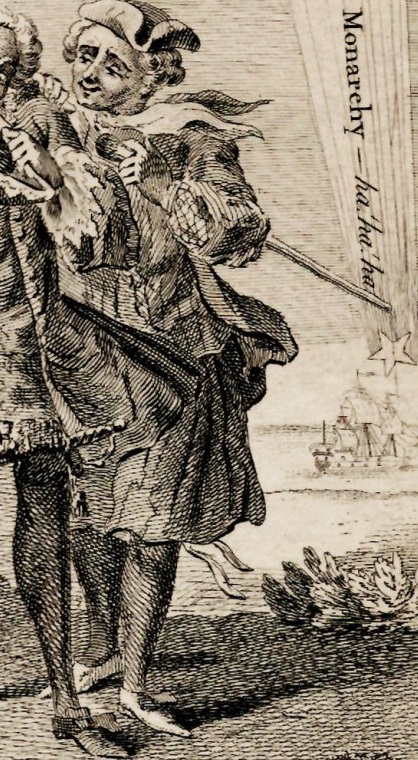 On the far right, a single sailor, named Jack Tar, rests his hand on the shoulder of Monsieur Le Politiciene. The monsieur is despondent over the loss of America (again, a far cry from certain). Jack does not comfort the poor fellow, but mocks him:


Hark ye Mounseer! was that your Map of North America? what a vast tract of Land you had! pity the Right Owner shou'd take it from you.

Jack wears a reversed cocked hat over a bob wig, and a plain cloth at his neck. His jacket is loose fitting and ends below the top of the thigh, draping over his petticoat trousers. As with the other sailors, he wears long ribbons at his knee. A checked shirt is visible beneath a waistcoat with narrow vertical stripes. His shoes are pointed toe, and the tongue hangs out from his buckle, perhaps in "sailor's fashion."
Posted by Kyle Dalton at 7:37 AM