The Imports of Great Britain from France, 1757 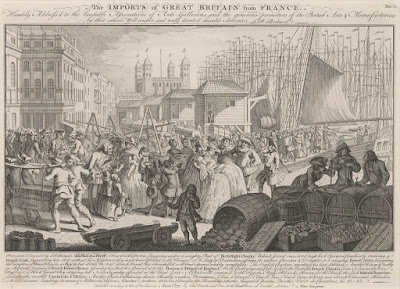 Despite being born in France, Boitard was more than happy to tap into British worries about French influence on their culture. This political cartoon depicts the arrival of dandies and the emasculation of Londoners by the goods brought across the channel. published some eight years after Hogarth's Gate of Calais, perhaps Boitard is attempting to bookend Hogarth's piece by providing the geographical opposite to his work.

The Gate of Calais is also known as O The Roast Beef of Old England, borrowing its name from the song composed originally in 1731. Among the lyrics is this key verse:


But since we have learnt from all-vapouring France
To eat their ragouts as well as to dance,
We're fed up with nothing but vain complaisance
Oh! the Roast Beef of Old England,
And old English Roast Beef!

Both Hogarth and Boitard are warning about the corrupting influence of French culture. Joining the artists in their scorn are a pair of sailors leaning on the larboard rail of a packet that is disgorging its vile passengers: 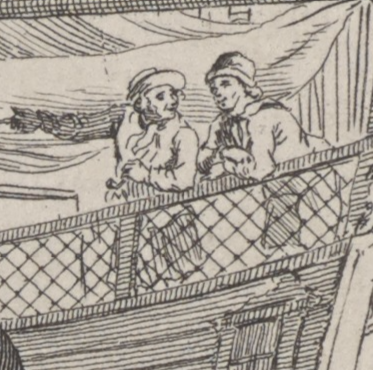 One wears a round hat, the other a knit cap. Each wears a plain neckcloth draped over their simple jackets (which appear to be without cuffs, and a pair of petticoat trousers. The man on the left holds a pipe in one hand, and wears a bob wig beneath his round hat.
Posted by Kyle Dalton at 10:00 AM