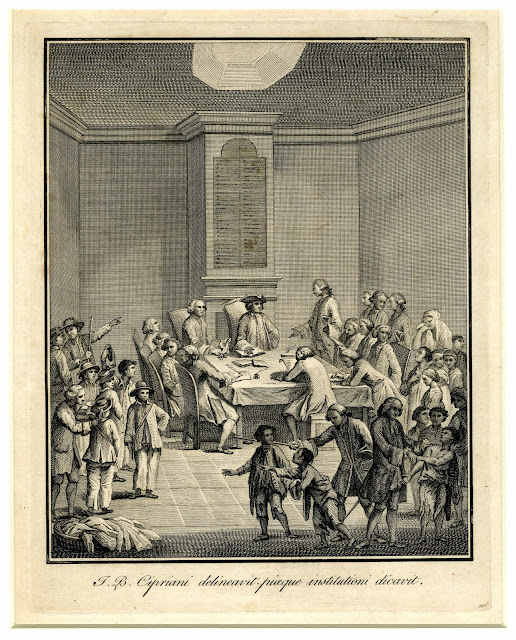 The next few posts will deal with prints from the Marine Society. This charitable organization was founded to take children off the streets and give them professional training at sea. It was a popular organization through the latter half of the eighteenth century, and continued so into the nineteenth. No less a personality than Lord Nelson gave it his hearty approval and support. In fact, the Marine Society still exists today as the largest non-profit in the United Kingdom.


The poor boys on the right are directed to the pile of clothes on the left, where gentlemen help fit them out for sea. Thankfully, the boys are turned front and back to give us a good view of their slop clothes. 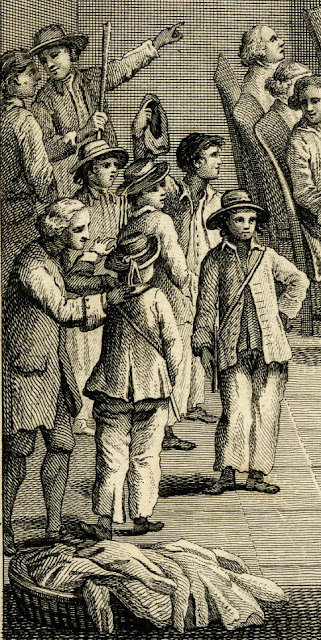 Uniformly dressed, they all wear round hats with a ribbon around the brim. This is a particularly interesting inclusion. Most round hats are depicted as very plain, and ribbons hanging off the back is more common of nineteenth century depictions. Clearly, this was also present in the eighteenth century, if far less common.

Their jackets are short, without waist pockets but with collars. The sailor lad in the foreground shows us a triple vent to his jacket, while his future shipmate to the right gives us a good view of the front, demonstrating at it is single breasted. Only two of the boys are turned far enough over for us to see their waistcoat, which are single breasted. None of them wear neckcloths.

In the background stand two adult sailors. One wears a wide brimmed round hat trimmed with white tape and sporting a cylindrical crown. He also carries the sailors' trusty stick.
Posted by Kyle Dalton at 8:00 AM