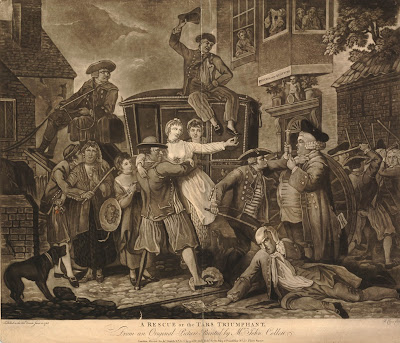 A Rescue, or the Tars Triumphant, Butler Clowes after John Collet, 1768, British Museum. 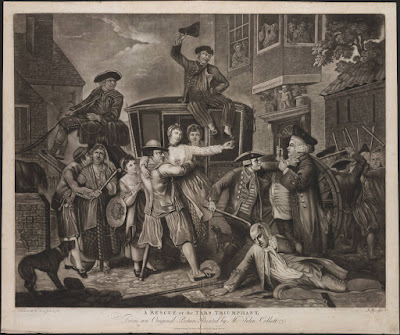 A Rescue, or the Tars Triumphant, Butler Clowes after John Collet, 1768, Walpole Library. 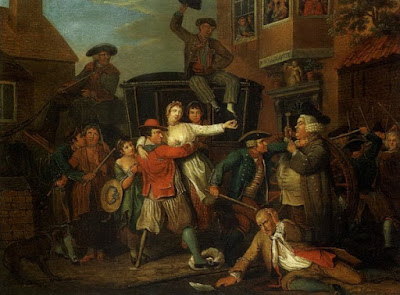 Clowes' print of Collet's painting was a popular one. Copies of these prints exist in the British Museum, Yale University Lewis Walpole Library, the Royal Collection Trust, and the Yale Center for British Art. The original painting was sold at auction in 1998, but I have yet to determine precisely where it is housed. A private collector may be in possession.

The May 1767 edition of Gentleman's Magazine thought well of a recent exhibition that included John Collet's works, specifically this painting and his "Recruiting Serjeant."

Mr Collet imitates the manner of Hogarth with great success; he has shewn a great deal of humour both in his recruiting serjeant and the Rescue, or the Tars triumphant; he is very much improved in his colouring, since the last exhibition.

Collet's chaotic scene is one of sailors fighting off lawmen to rescue an attractive young woman and her retinue. On the ground is a man with a brand new concussion, reaching toward a warrant issued for "J. Seale." Presumably, J. Seale is the woman being lifted from the carriage by the wooden legged tar. I have not yet determined if J. Seale is an actual person, or simply a character invented for the scene. A portly constable points to his tipstaff, but is a rather inexperienced chap: out of his back pocket sticks an instructional pamphlet entitled "The Compleat Peace Officer." 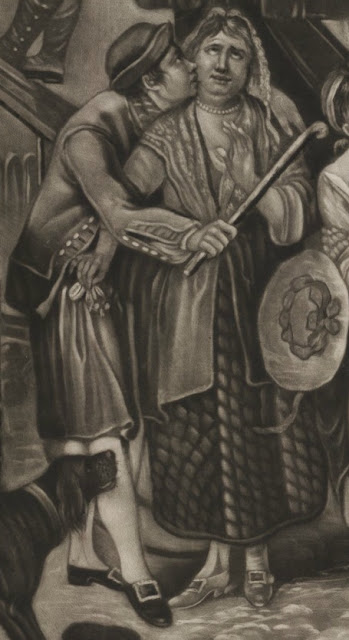 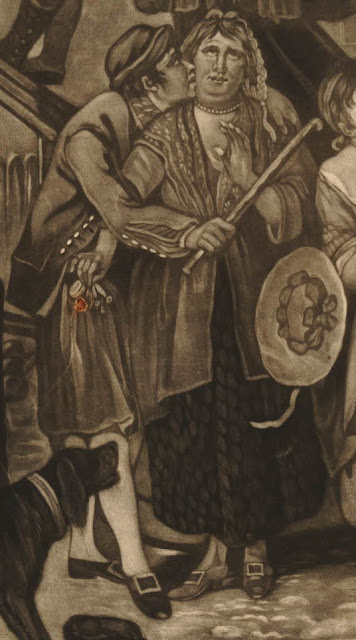 Starting on the left, we begin with a sailor giving a kiss to a woman who feigns an insincere protest, while lifting the tarpawlin's watch. He wears a black cap and his hair is cut short. The neckcloth is patterned, but the exact pattern is difficult to make out. His double breasted blue jacket with white metal buttons and white piping ends below the waist and is made with flap pockets at the waist and open mariner's cuffs. Otherwise, he wears slops/petticoat trousers, white stockings, and pointed toe shoes with white metal rectangular buckles. In his right hand is a short stick. 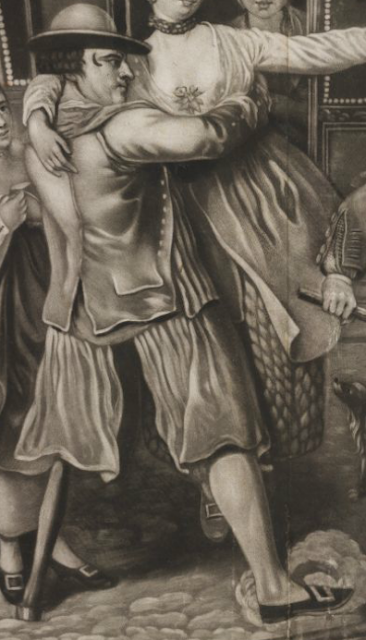 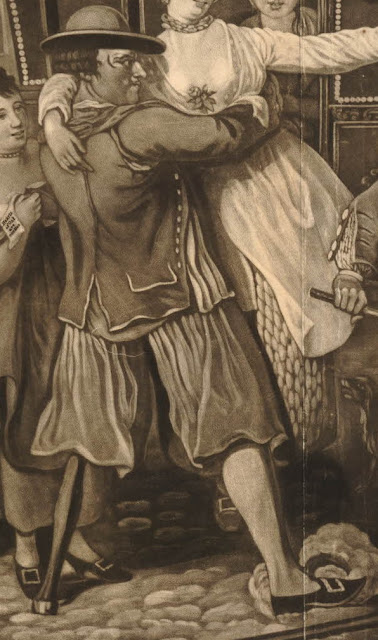 Our next subject is a right salty tar! Wooden legged, scarred, and scowling, he clutches the woman while staring down what might be a constable or sheriff. He wears a red round hat (possibly treated leather) with wide brim, short hair or bob wig, and a blue neckcloth. His red jacket is trimmed in a light colored tape with white metal buttons, and waist pockets without buttons. There is a single vent in the back of his jacket. His waistcoat is almost the same length as the jacket or perhaps even longer. The front of the waistcoat is striped in red, and is backed in a plain brown fabric. Our jack wears slops and a blue stocking. The pointed toe shoe with a rectangular buckle at his foot steps on the wig of the fellow with the head wound. 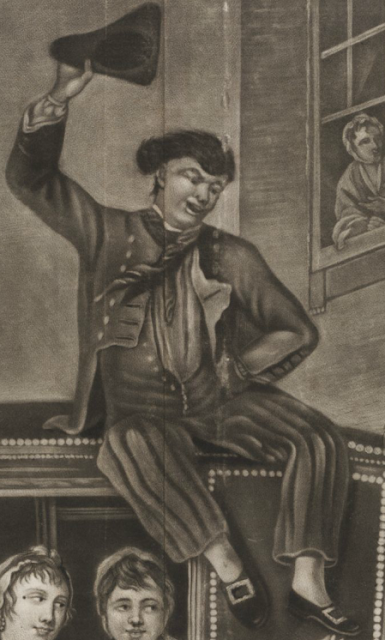 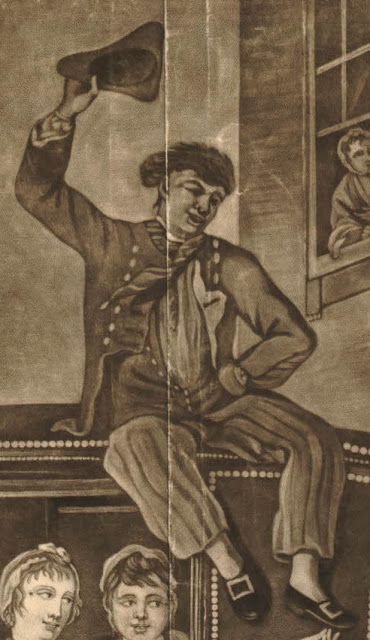 Above the scene and cheering the fray is a jolly tar waving his plain black cocked hat. Though like his mates his hair is short, it looks like he's got a rather nasty case of hat hair. The neckcloth at his chest is white and striped in red. His brown jacket is double breasted and lined, with white buttons, and open mariner's cuffs. Beneath it is a red single breasted waistcoat, leading to his white trousers with thin blue stripes running vertically. White stockings lead into pointed toe shoes with rectangular white metal buckles. 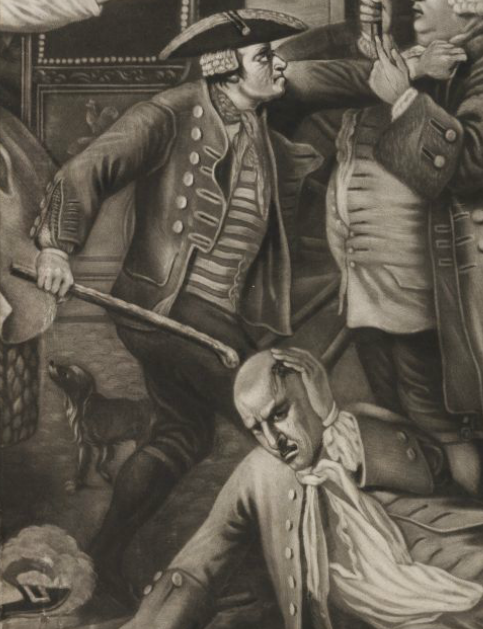 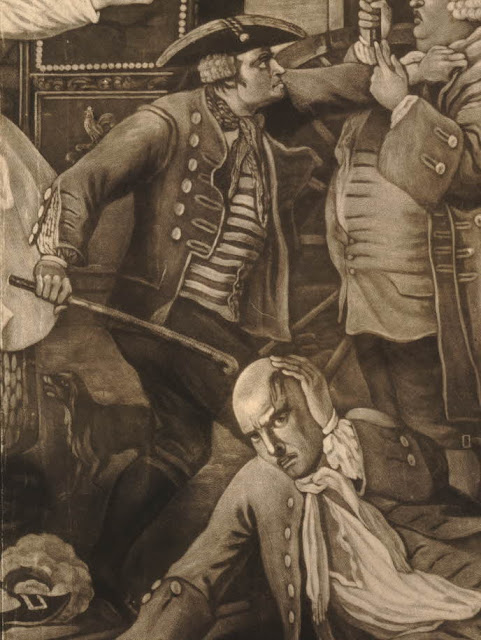 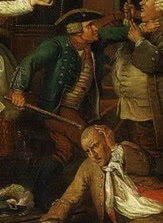 The most aggressive sailor takes the portly officer by his collar. The sailor wears a particularly neat cocked hat, trimmed in thick tape of gold. It bears no cockade, but a large button and loop on the right side. A bob wig ends well above the collar, showing off the red neckcloth with white dots that he wears. The waistcoat is single breasted with horizontal red stripes. He wears a fairly nice blue jacket, trimmed in white, double breasted, with waist pocket and slash open cuffs, as well as white buttons. Behind his cudgel we see that, unlike his mates, he wears a pair of red breeches. His stockings are black, but we don't get a good view of his shoes or buckles. 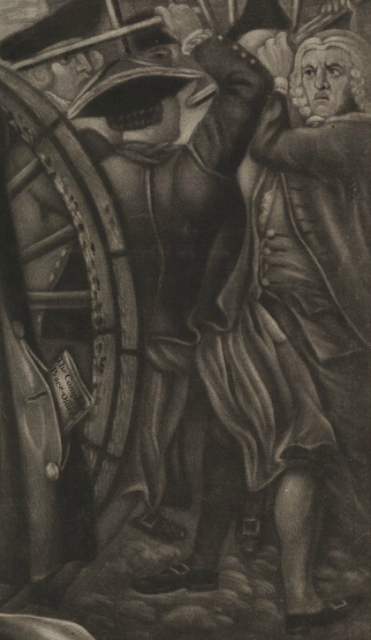 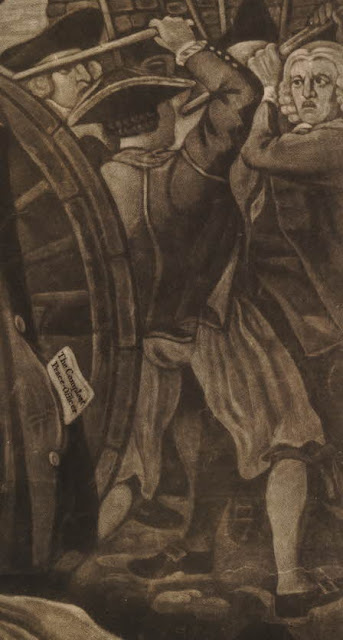 At the far right we see another sailor actively involved in fighting off the watch. He wears a cocked hat trimmed in white tape, and a dark colored bob wig. His neckcloth is red and the jacket is trimmed like the others with has slash cuffs, though has no waist pockets. It appears that his jacket is double vented. Once more, he wears white stockings and slops.
Posted by Kyle Dalton at 7:00 AM