Frontispiece, The Narrative of the Honourable John Byron, 1768 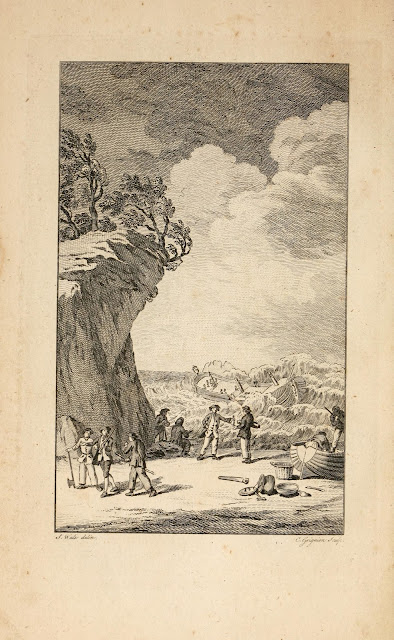 The Anson Expedition of 1740 is a fascinating and multi-faceted tale of death, failure, and surprisingly resounding success. The crew of the Wager, a store ship intended to accompany the military circumnavigation, had the worst of it. She wrecked on the coast of South America early in the expedition, and her crew struggled to survive. The captain failed to keep them together in the wake of Wager's destruction, with a large portion of the crew piling onto a boat and effectively marooning the captain and his loyal people. Most of those who survived the initial wreck never made it back.

Among those who remained loyal to the captain was Midshipman John Byron. He was one of only four of the loyalists to make it back to the England, and that only after half a decade of survival. Byron wrote of his adventures in The Narrative of Honourable John Byron. Byron's account was the basis of Patrick O'Brian's The Unknown Shore, a predecessor to his Aubrey-Maturin series and companion piece to his first maritime novel The Golden Ocean. 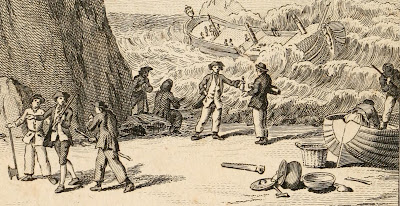 Engraved as a frontispiece to this book, the above plate depicts the crew ashore as their ship founders. They gather themselves and what equipment they can salvage in preparation for the danger that awaits them. 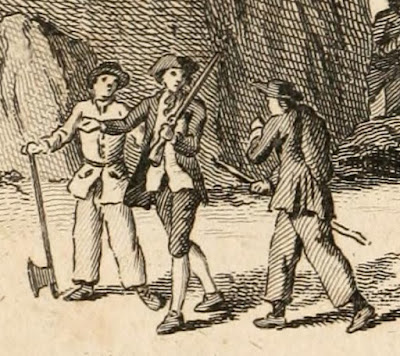 Two tars join an officer who has a fusil over his left shoulder, and gestures to off the frame. On the left is a sailor with a broad ax, who is perhaps a carpenter. He wears a narrow brimmed round hat and what might be a single breasted sleeved waistcoat with flap pockets and a belt around his waist. His trousers are long and loose, ending at the ankles.

To the right is a sailor with a broader brimmed round hat and a jacket with side vents that ends about the top of the thigh. He also wears long and loose trousers. Over his right shoulder is a bag, and in his right hand is a stick. 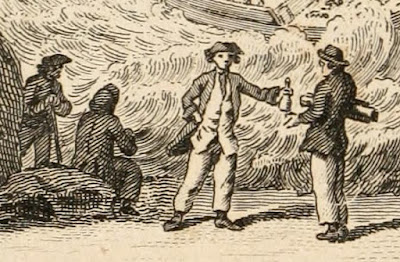 An officer offers a bottle to a nearby tar, who wears a round hat with fairly cylindrical crown and very narrow brim. His jacket and trousers are just like those of his mates, but appears to have buttoned flap pockets at the waist and a single vent at the back. Under his right arm is tucked a few items, perhaps charts for the eventual trip home.

Sitting on the rock is a jack with a round hat, triple vented jacket and long, loose trousers. Beside him and leaning on his trusty tick is a sailor with bob style hair, a short jacket, long trousers, and what might be a reversed cocked hat or barge cap. 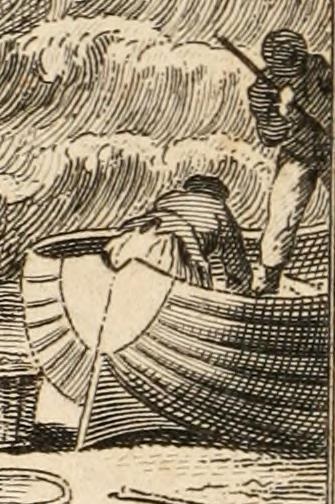 In the boat are two sailors. The one standing is dressed the same as all of his mates, save for the fact that slit cuffs are clearly visible. In the stern another sailor bend over, wearing a jacket with a single vent at the back, and what are most likely slops/petticoat trousers.
Posted by Kyle Dalton at 7:00 AM