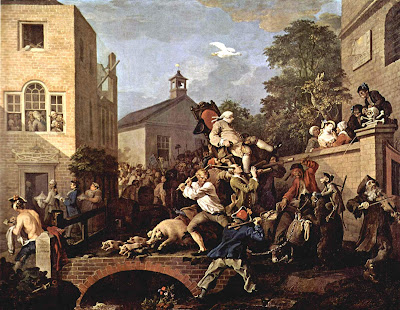 This chaotic scene is typical of the famous satirist Hogarth, and part of series "Humours of an Election." Scholars have spent much ink in analyzing the many, many layers of Hogarth's work, but we'll focus on the Jack in the center of the image, swinging a cudgel at some fellow who swings his own weapon in reply


The wooden legged sailor wears a light red cocked hat trimmed in a white tape, cocked over his right right with an orange cockade. It's a very unique hat, and I've yet to see its equal in any other period images of sailors. The nearest I've seen is the red hat worn by a salty tar at the center of John Collet's "A Rescue, or the Tars Triumphant."

With the shine that Hogarth gives to the cocked hat of the tarpawlin at the center of his painting, it may be that these hats are painted, or perhaps treated leather. The red is bright and shows no sign of weathering on either figure, so it might be too much to presume that these are for weatherproofing. At that, two images out of the over 300 I've examined so far hardly indicates a widespread trend.

Our fighting sailor wears a white bob wig. His dotted neckcloth hangs down over the back of his blue jacket, which cuts off below the waist, and is triple vented. The cuff might not have a slash cut to them, but at this angle it is difficult to tell. His trouser legs end right at the bottom of the calf, rising high with his stride. Our sailor's one good leg is clad in a gray stocking and black shoe with a rectangular brass buckle.
Posted by Kyle Dalton at 7:00 AM