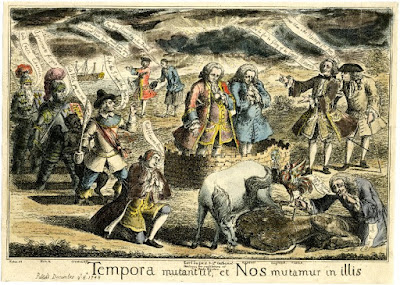 Once more I have Adam Hodges-LeClaire to thank for digging up this work!

John Richard Moores in his "Representations of France in English Satirical Prints, 1740-1832," pages 56-57, relates the meaning behind this dense political cartoon, stating that it is "voicing dissatisfaction toward the treaty of Aix-la-Chapelle, which concluded the War of Austrian Succession." The artist depicts:


the Earl of Sandwhich (1718-1792), the plenipotentiary who negotiated the treaty on behalf of Britain, who stabs the British Lion with his knife. 'Dam Posterity I'll get Money.'

There's a lot more symbolism going on here, but one thing that Moores does not address is the sailor in the background, holding out his hat toward a gentleman in red. 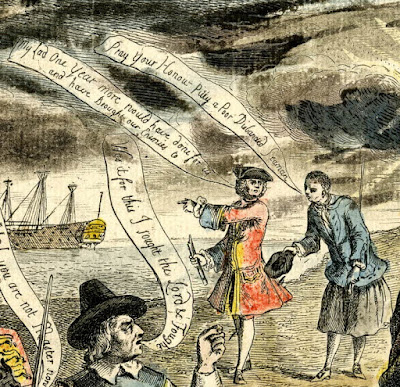 "My Lad One Year more would have done for us and have Brought our Enemies to," replies the well dressed man.

The artist argues that the war ended too early, and that the end of the war brought loyal sailors to destitution. Our gentleman's reply ("would have...Brought our Enemies to") perhaps implies that further prize money from the capture of more enemy vessels would have helped ease the transition into unemployment for these tars.

Given the reversed cocked hat, broken spyglass, bob wig, and dissatisfied  expression, it may be safely assumed that the gentleman is a naval officer. This print was released in 1748, the same year that Royal Navy uniform regulations were first instituted, and so we should not take the decision of the colorist as evidence that he is not among the brotherhood of officers.

A quick note, I have chosen to include the cocked hat and bob wig in the tags for his post as reference for future study. They are not being worn by the common sailor. 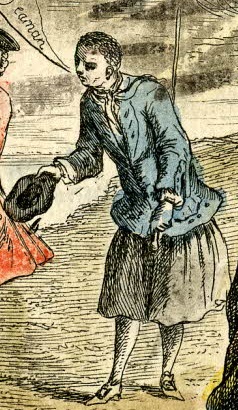 The sailor's hair is remarkably close cut, and perhaps curly. His neckcloth is long and white, tied close. He wears a single breasted jacket with flap pockets at the waist which do not reach the cloth covered buttons. His mariner's cuffs are open with three cloth covered buttons. In his outstretched right hand is a round hat with narrow brim, and in his left is a walking stick. Hanging down below the skirts of our sailor's blue jacket is a pair of slops/petticoat trousers, over white stockings and pointed toe shoes with rectangular buckles.
Posted by Kyle Dalton at 8:40 AM