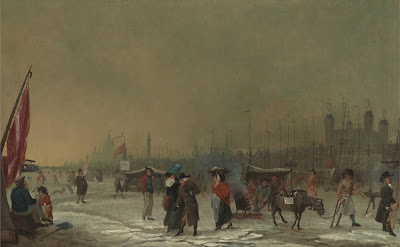 Thanks once more to Adam Hodges-LeClaire for pointing out this piece to me.

From the seventeenth through the early nineteenth centuries, when winters were colder than they are today, the Thames would occassionally freeze. On these occasions, Frost Fairs would be held. People of all classes would clamber across the ice and engage in various revelries.

Collings is depicting one of the last Frost Fairs, which occurred in 1788. In the background, a forest of masts clouds the Tower of London, frozen in port. Scattered among the common and classy folks of London (and even a Dutchman) are a number of sailors who have no work to do while they wait for a thaw. 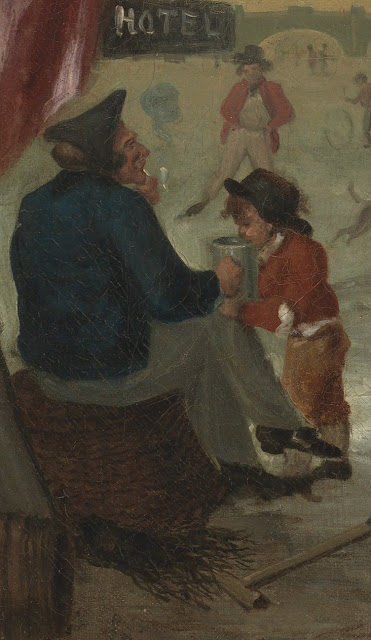 This sailor keeps his hands warm in his trouser pockets. He wears a reversed cocked hat, black neckcloth, blue waistcoat, and red jacket. 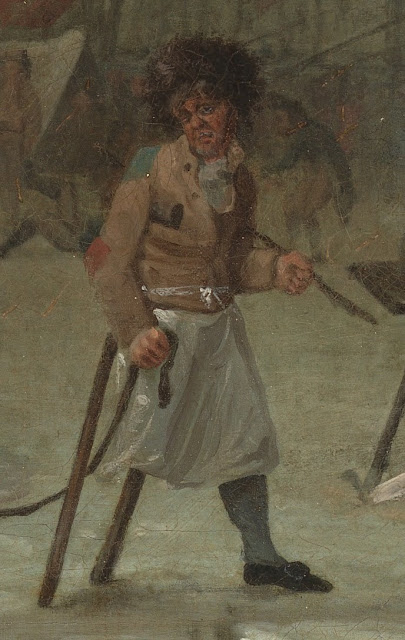 Leading a mule, this beggardly peddler is perhaps a veteran of the sea. He wears petticoat trousers over his wooden leg, a stick is tucked under his arm, and his brown jacket is patched at the shoulder and elbow. Atop his head is a bushy fur cap, and gray whiskers cloud his chin.
Posted by Kyle Dalton at 7:00 AM