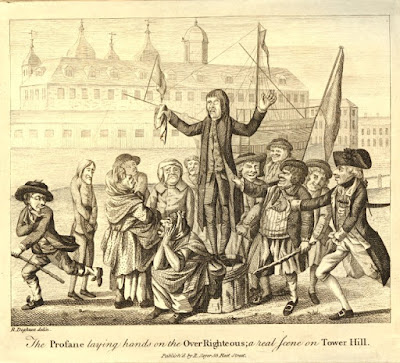 The Profane Laying Hands on the Over Righteous, Robert Sayer, c1776-1784, British Museum.

Sayer proudly proclaims that this print is 'a real scene on Tower Hill.' Robert Dighton, the artist and engraver who created this image for Sayer to produce, gives us a scene of a preacher standing atop a barrel preaching to a crowd even as a press gang closes in on him. While one of the gang grabs the peacher by his coat, a sailor can be seen darting away in the left of the frame. 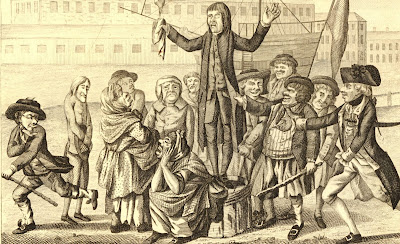 What event is being portrayed here?

The British Museum's curators declare the preacher to be a Methodist. This makes sense for a press gang. Even though they tended to be focused on experienced sailors who could actually help the navy (rather than taking on inexperienced men who possessed no nautical skills and would prove more a burden than a benefit), press gangs did sometimes target Methodists.

Denver Brunsman, in his excellent book The Evil Necessity: British Naval Impressment in the Eighteenth-Century Atlantic World, relates several cases of Methodists being pressed in the 1740's and 1750's, including John Wesley, one of the co-founders of Methodism.

This does create a problem with the date on this piece. The officer is wearing a pattern of uniform proscribed after 1767, and the dress of all participants suggests at least a 1770's date, and well within the c.1780 date offered by the curators of Collage: The London Picture Archives, or even the 1784 date offered by the British Museum.

1784, however, poses a problem. When I reached out to Denver Brunsman, he stated "I have not documented any cases of press gangs harassing Methodists past the 1750s" and promised to look into it. We both returned to our research, where I eventually dug up a single reference to an event like this within the rough 1770-1784 timeframe.

The British Museum curators cite the 1887 A Catalogue of Maps, Plans, and Views of London, Westminster & Southark as the source of their date. Indeed on page 430, the author does state explicitly that the print was created in 1784, but provides no citation for this.

Do you know of any other events in which Methodists were targeted by press gangs? Leave a comment below! 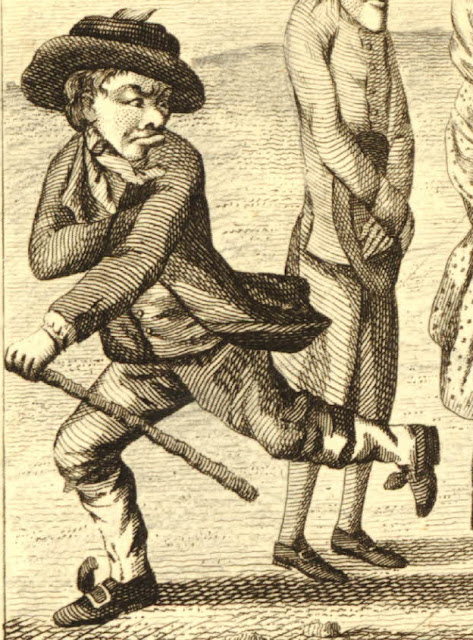 Using the preacher as a distraction, this sailor takes to his heels before the press gang takes notice of him. He wears a round hat with something fluttering behind the cylindrical crown. I think it may be the bow of a ribbon tied around the base. His jacket has closed slit cuffs and ends about the top of the thigh. A plain neckcloth is tied above his single breasted waistcoat and breeches run down to loose fitting stockings. The straps of his shoes are hanging about in 'sailor fashion.' As with any good sailor ashore, he carries a stick. 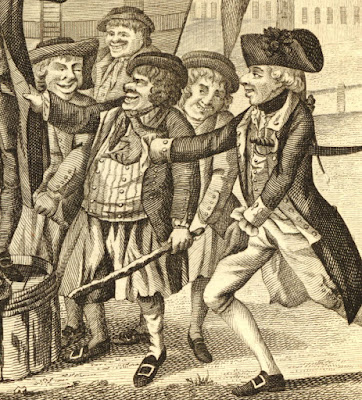 The press gang and their sneering officer make for a visibly unwelcoming lot to intrude on the sermon.

The sailors all wear jackets that end about the top of the thigh and have closed mariners cuffs. They all wear round hats, save for one fellow on the far left who appears to wear a strange sort of cocked hat. The burliest sailor, who grasps the pastor's coat and holds a cudgel in his free hand, is the one we get the best look at.

He wears his own hair, curled and loose, above his shoulder. His handkerchief is black and rests on the double breasted waistcoat of narrow vertically striped fabric. The entire gang wear petticoat trousers that end just below the knee and pointed toe shoes with rectangular buckles.
Posted by Kyle Dalton at 10:00 AM