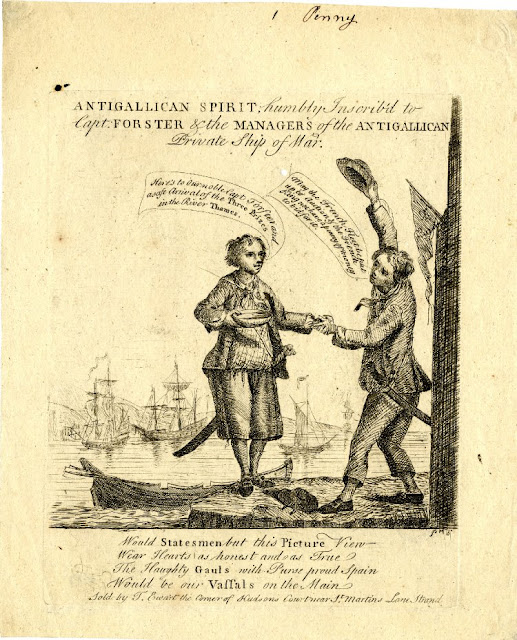 "Would Statesmen but this Picture View-" begins Ewart's inscription on this engraving, "Wear Hearts as honest and as True, the Haughty Gauls with Purse proud Spain, Would be our Vassals on the Main." Ewart offered this one penny broadside, complete with strained prose, lauding the successes of the Antigallican privateer.

Antigallican, under Captain William Forster, was a privateer out of London in the Seven Years War where she met with enough success to inspire a song.


I have searched through newspapers of the time, and find references to privateers named Antigallican out of Liverpool and Newcastle, but I have yet to find one captained by Forster in 1781, which the British Museum claims is the possible year of publication for this piece. It is possible that I have overlooked a source. It is also possible that this broadside is a fond remembrance of recent memories. Britain's successes in the Seven Years/French and Indian War were fresh in the minds of the British people, even as the fortunes of the American War were at a low ebb.

Given that Thomas Ewart published primarily in the 1750's and 1760's, it is more likely that this piece was also published in that period, when the topic of Forster and the Antigallican would have been more relevant. 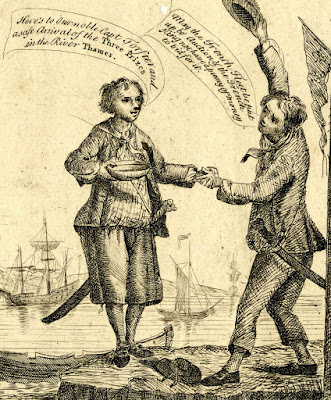 Standing ashore, a pair of sailors shake hands. The first offers a toast: "Here's to Our noble apt Forster and a safe Arrival of the Three Prizes in the River Thames." The toast is continued by his mate: "May the french Fleet be put up to Auction & the French King not have a penny of money to bid for it." 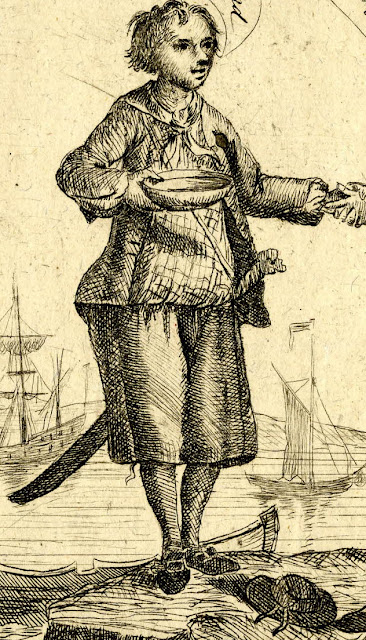 Holding a punch bowl, this sailor is dressed in a single breasted jacket with open slit cuffs over a checked shirt. Crossing his body is a baldrick for his sword, a fine piece with an animal head pommel. His hair is short and loose. Our sailor's neckcloth is plain and tied close to his neck. Petticoat trousers hand to just below the knee, and the ties of his breeches are peaking out beneath. At his feet is a round hat with a short, conical crown and a ribbon hanging off.

His mate wear a plain neckcloth tied close to the neck and a plain white shirt beneath a jacket that ends above the top of the thigh and open slit cuffs. Above his head he waves a round hat, and a sword hangs from his left hip. His plain trousers end just below the middle of the calf.
Posted by Kyle Dalton at 10:00 AM