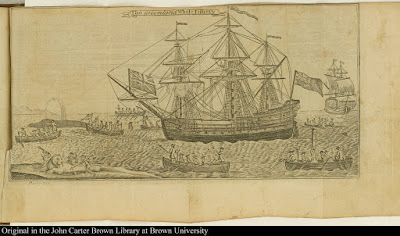 This engraving was included in the book A Description of Three Hundred Animals, published in London in 1774. Despite the title and apparent purpose of the book, this engraving focuses instead on the destroyers of nature. Whalers are shown in a great many boats, hunting a large non-descript whale and a fanciful sea lion, clearly illustrated by someone who had never seen one. 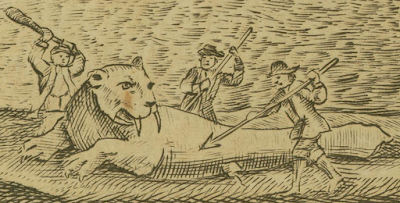 Three whalers attempt to take down the sea lion with harpoons and a club. From left to right, they wear a cap, round hat, and what might be (to use a nineteenth century term for a hat treated for foul weather) a sou'wester. All wear jackets with cuffs, and the tar on the far right wears breeches. 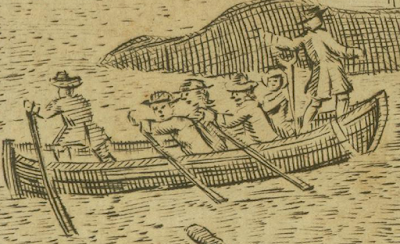 The sailors in the boats are uniformly dressed in the same jackets that their mates ashore wear, and round hats of various sizes. Those we can see are also wearing breeches, without a pair of trousers or petticoat trousers to be seen.

The only exception is the boat on the far right, in which the men wear cocked hats of various cuts. The fellow in the bow appears to be wearing his reversed, though that is up for debate.
Posted by Kyle Dalton at 7:00 AM