A Fleet of Transports Under Convoy, 1781 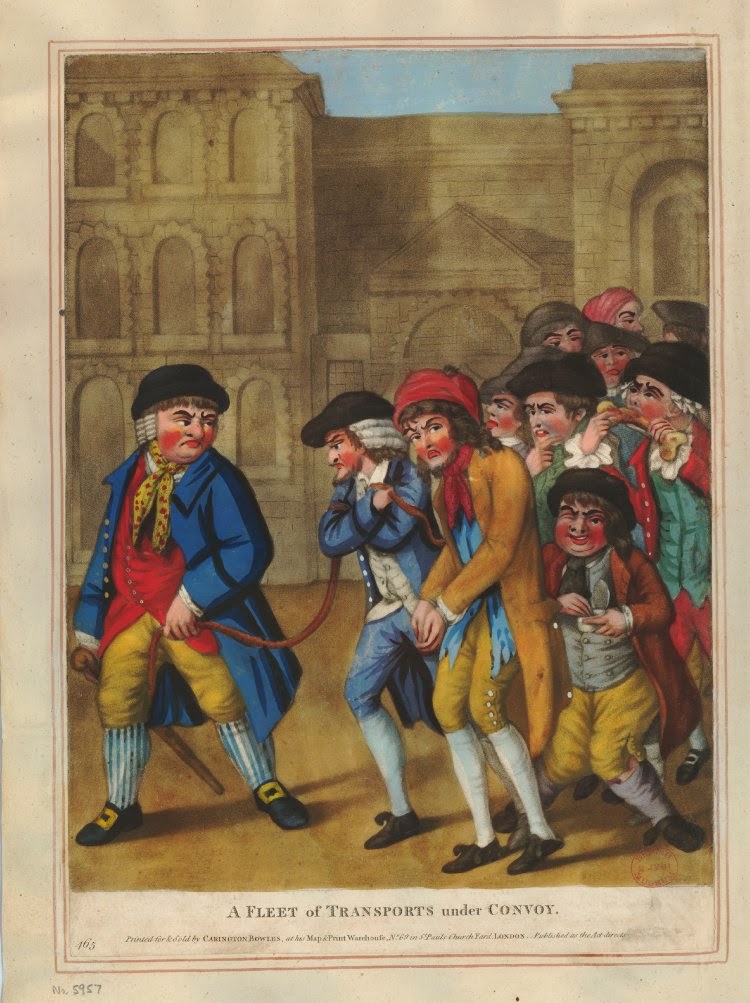 A Fleet of Transports Under Convoy, Carington Bowles, 1781, British Museum.

Another in Bowles' series of using nautical language metaphorically, this one is not referencing anything to do with Bowles' affinity for depicting sailors as womanizers. Instead, a tar leads a group of ne'er-do-wells for "transportation." Among the punishments on hand for British judges to mete out to offenders was a sort of banishment. Convicts could be shipped overseas to a colony. North America had received a goodly number of these (much to the consternation of many American colonists), but with the outbreak of war these convicts are bound...somewhere else. The Crown did not begin to send convicts to Australia until 1787, so I'm not really sure where these poor fellows are headed.

Though beyond the scope of our focus, it is worth noting that this image is an antisemitic one. The two convicts in front, with thin beards, are identified by the British Museum's website as Jews. With a scowl the sailor looks back to the crowd, but his eyes seem to be fixed on the two Jews in front.

The next few images I will be examining are going to touch on some very sensitive topics, and antisemitism is among them. Much more prominent in depictions of sailors, however, is the slave trade. These should not be excluded from our examination, but they should also not be handled lightly. It is beyond question that human suffering on an unprecedented scale arose from racism, much of which had its roots in the period we are examining. It is with utmost sensitivity that I approach these images.

Leading the captives for transportation is a sailor bearing a cudgel in his right hand. Atop his head is either a cap or a round hat with a very short and upturned brim. His hair is a bit baffling: it has white curls along the sides, but short brown bangs at the front. Is Bowles trying to suggest that our tar is wearing a cheap and ill-fit wig?

Jack tar's blue jacket is single breasted and fitted with brass buttons, and has a collar and cuffs. The waistcoat is a single breasted piece with waist pockets and a cut-away, much more common among other professions than among sailors. The waistcoat buttons match the buttons on the jacket. A dotted neckcloth of yellow and red is tied over his white shirt, hiding any sign of a collar. Yellow breeches are buttoned over blue and white striped stockings. The buckles on his shoes are large and brass.
Posted by Kyle Dalton at 11:27 AM