The bull over-drove, or, The drivers in danger, John Harris, 1782, Library of Congress.

Once again, the Library of Congress catalog entry pretty well sums it up:


Print shows a bull trampling the prostrate body of Lord Sandwich, lead driver, and kicking toward Lord North and George Germain, the "drivers in danger." The bull is charging toward three men, representing France, America, and Spain; in the background, on the left, British sailors cheer.

I am not immediately inclined to agree on their last point. Clearly, the fellow in the foreground is a sailor, but those behind him wear their hair long and clubbed, wearing frock coats and breeches, none of which matches the popular image of the sailor. It would probably be safer to say that only the sailor in their front can be definitively identified as such. 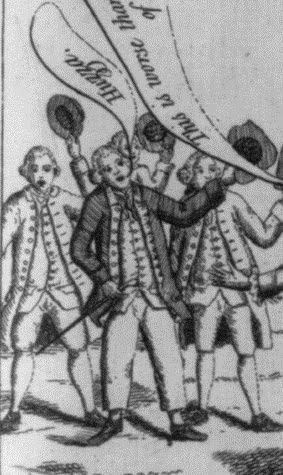 He waves a dark hat, but the angles on the hat make it difficult to determine whether it is a round hat, or a cocked hat. I would lean toward round hat, but cannot be sure. His jacket skirts extends to just above the thigh, and is far fancier than most: double breasted with a button down collar, white lapels, cuffs, and flap pockets at the waist. A single breasted white waistcoat with flap pockets and a cutaway is likewise atypical for sailors. A plain black neckcloth is tucked into the waistcoat. White trousers end above the ankles, and a stick is held in his opposite hand. He is well turned out to cheer on the bull with a "Huzza."
Posted by Kyle Dalton at 8:10 AM