ANTICIPATION; or, the CONTRAST to the ROYAL HUNT, 1782


ANTICIPATION; or, the CONTRAST to the ROYAL HUNT, Viscount Marquis Townsend, 1782, Colonial Williamsburg.

Following Britain's devastating 1781 defeat at Yorktown, this political cartoon expresses confidence in the ability of the empire to endure. While a naval battle rages in the background, sailors defend and hold upright a temple on the right, which is held up by the columns of Gibraltar, Jamaica, and Barbadoes. A third column entitled Tobago is being erected to replace the lost columns of America, Virginia, Charles Town, Rhode Island, and another that I can't quite make out.

There are a lot of figures spouting a number of word balloons that are only tangentially related to our exact study, but among them is King George III (having his eyes checked) and Lord North. You can read more about them in the catalog entry linked above. 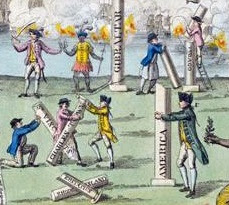 For our study, we'll focus on the tars around the temple to the right. In the foreground, wrestling with the collapsed columns, there are two jacks aided by a gentleman in a yellow frock coat. The tarpawlin to the left wears a blue jacket with short skirts, ending just above the thighs, and appears to have two or three vents. He wears a round hat with a flat topped cylindrical crown, and white trousers. Beside him is his shipmate in a flat hat with a narrow brim and a round topped crown, a light purple jacket, and a pair of trousers.

Behind them are a pair of sailors erecting columns representing the Caribbean Islands that the Royal Navy had secured from their opponents during the war. The tar on the left wears a blue jacket just like his mate further forward, a round hat with a narrow brim, and a pair of slops with white stockings. To his right is a sailor on a ladder, wearing a light purple jacket, round hat, and either a pair of white breeches or a pair of white slops. Either way, his stockings are likewise white.
Posted by Kyle Dalton at 6:39 AM