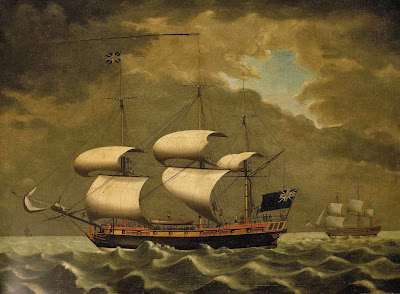 I usually avoid images of ships themselves, as the detail on sailors is slight, and they are painted so small they are often indistinguishable from passengers or officers. This image would have been the same were it not for a detail of the image expanded by the National Maritime Museum itself. 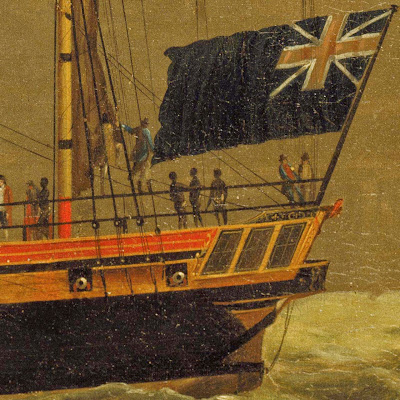 By far more important to historians is the slaves seen on deck. This is almost certainly a painting of a slave ship from Liverpool. As the National Maritime Museum states:

The precise circumstances of this painting are not clear, and it may have been commissioned for the Liverpool offices of a bank or merchant involved in slavery to present an acceptable view of the trade.

We may be looking at early pro-slavery propaganda.

This blog's focus has been as narrow as they come: the representations of common sailor's clothing in original eighteenth century images. Usually these images depict sailors drinking, cavorting with women, or acting as personifications of the British nation. These topics are connected to the slave trade, but not as directly as images like this one. It is not that I have been avoiding the slave trade, but rather that the type of images I have been examining (political cartoons for example) simply didn't address it.

What is somewhat disturbing about this image, in our case, is that the sailors of the slave trade were virtually indistinguishable from those of other services. I've mentioned before the privateers, naval sailors, and merchantmen were largely interchangeable. This is equally true for slave trade sailors.

In the center of the image and climbing the ratlines are a pair of sailors. In the foreground and slightly to the right just beside the blue ensign stands a tar in a longer blue jacket, ending about the mid thigh. His black round hat has a taller crown, and his slops end just below the knee. Really, there's nothing exceptional about this sailor. The tar behind him and to the left is similarly average. He wears a black knit cap, a brown jacket of equal length with a single vent in the back, and a pair of white breeches. There are other European figures in this  image, some of whom could be sailors, but there's no way to be sure.

This sobering painting is a reminder that it was average men who made up the slave trade, and engaged in one of the greatest and prolonged atrocities in human history.
Posted by Kyle Dalton at 11:41 AM