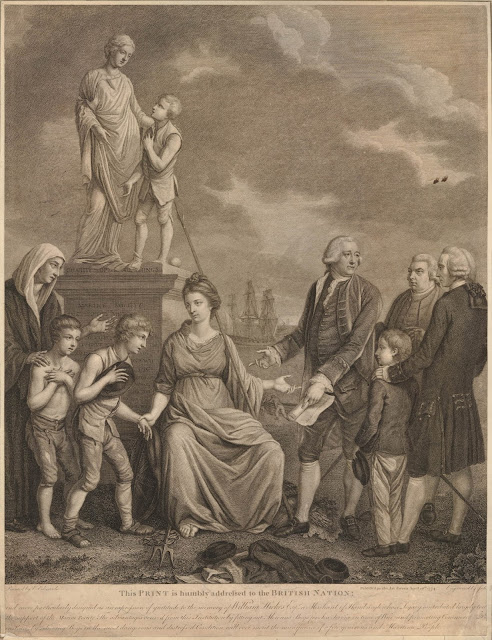 Yet another piece illustrating the Marine Society, the same charitable organization that has been clothing and training youths for service at sea for over two hundred years. We can see the usual cliches. Young boys, wearing ratty clothing and hunched over beneath the weight of their poverty, come to Britannia. She grants her charity to them, and we see the end result in a third boy who is properly dressed for sea.

He holds a round hat with a short brim turned up on all sides. His jacket appears to be triple vented, and he wears a new pair of trousers.

At the feet of Britannia, and beside a trident, is a pile of new clothing, waiting to be taken up by the indigent lads.

Another pair of trousers, a pair of round hats identical to that held by the lad above, and a jacket with a mariner's cuff make up the garb available to the boys.
Posted by Kyle Dalton at 8:00 AM

Email ThisBlogThis!Share to TwitterShare to FacebookShare to Pinterest
Labels: 1770s, round hat, trousers