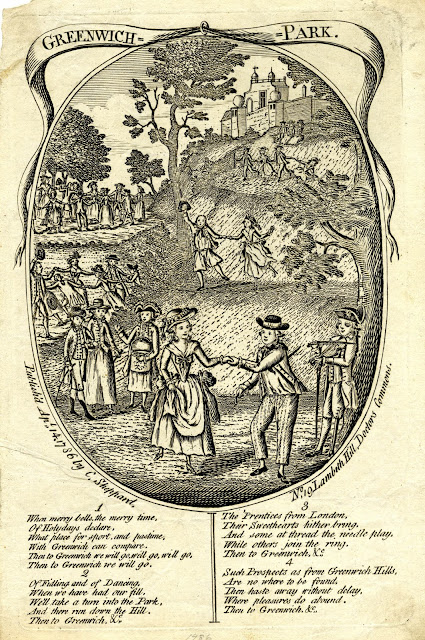 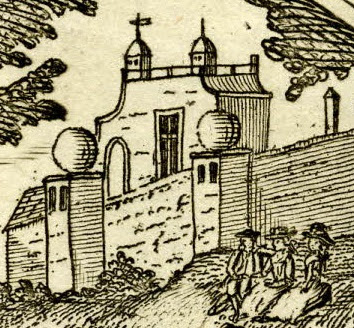 Sheppard gives us a scene of jovial gaiety as sailors, women, and gentlemen all enjoy dancing in the Park. If you look to the background on the right, you can see the Greenwich Observatory. Arguably, this was the institution that most effectively placed British mariners at the top of the international pecking order. Their accurate charts and chronometers gave Britain a nautical edge they would enjoy for generations. 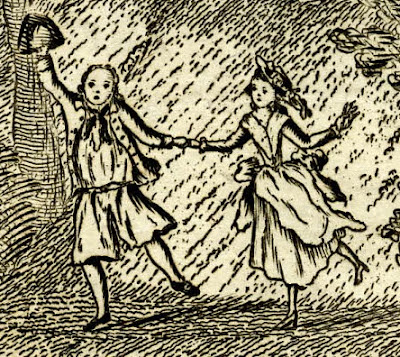 Here a sailor frolics with his lass. Jack cheerfully waves his cocked hat to the figures in the foreground. A black neckcloth is tied under his collar, but we can see the open top of his shirt beneath it, and so the tar lacks a waistcoat. He does wear a double breasted jacket and petticoat trousers. 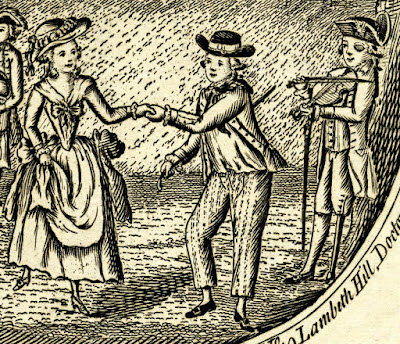 Like the mariner in the background, this tarpawlin wears a double breasted jacket (this one with lapels) and no waistcoat. A black round hat with a buckled band about the brim sits atop his head. He wears a black neckcloth and striped trousers with a broad fall fly. The familiar stick is tucked beneath his arm as he dances to the fiddler.

Our fiddler has seen enough of the sea. He is missing an eye and a leg, and so sports both a cane (which hangs from a strap around his left hand) and a peg leg. His cocked hat is trimmed with tape and decorated with a cockade. The breeches and waistcoat, coupled with this hat, might suggest him to be a landsman, but the tell-tale wounds of the sea, along with the flat bottom of his waistcoat, suggest he is a sailor. As an invalid or pensioner, a fellow such as him would not have been an uncommon sight in Greenwich. 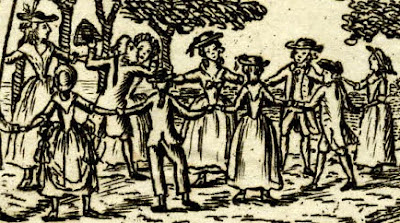 In the background far to the left, there is a circle of men and women, and I presume this is a game like Blind Man's Bluff. With his back to us in the center is a man with a jacket ending at the top of the thigh, a round hat with flat brim and conical crown, and trousers that end about the bottom of the calf. The jacket has a single vent in the back, and he wears a wig with queue. Wigs of this style are unusual among common sailors, and I believe this is the only example I've ever seen. 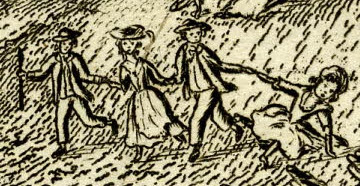 Running down the hill are a pair of sailors and their girls. The sailors wear collared jackets, trousers, and round hats. One wears a single breasted waistcoat, and the other may be interpreted as wearing the same or doing without a waistcoat altogether. The tar on the left carries a stick.
Posted by Kyle Dalton at 12:41 PM