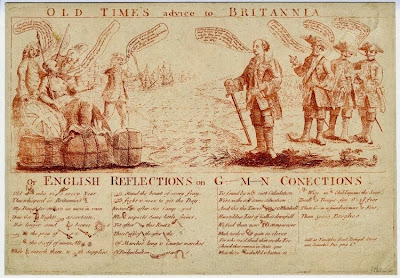 This print is also in the collection of the Library of Congress and British Museum. As a Seven Years War piece, this print is a political cartoon highly critical of the Prime Minister and his cabinet in their reliance on Germans as mercenaries and allies. Old Time advises the seated Britannia to rid herself of a detrimental alliance.

In support of "Old Time's Advice," Jack Tar shouts across the Channel his take on the newly popular song "Rule Britannia":


By the Strength of our Navy, wee'l soon make them Slaves. Then Huzza Britania, Britania rule the waves. 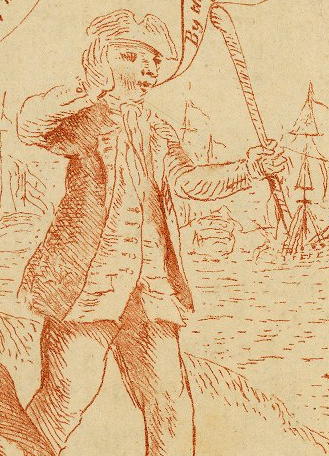 Jack wears a reversed cocked hat and a plain neckcloth that is tied about his neck almost as a cravat would be. His jacket has flap pockets at the waist but no buttons on the lapels. There is a single button closure on his slit cuffs, an arrangement I haven't seen before. Beneath the jacket he wears a single breasted waistcoat with flap pockets at the waist, and finally a pair of plain light colored trousers.
Posted by Kyle Dalton at 8:00 AM