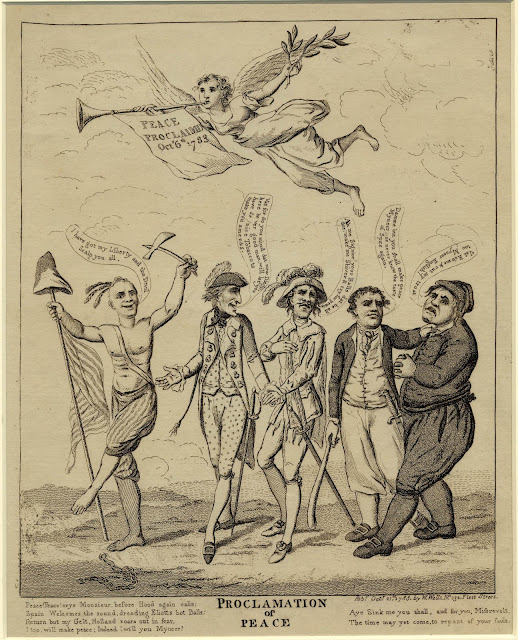 Mocking the alliance of America, France, Spain, and the Dutch during the American War of Independence, this political cartoon nevertheless welcomes the end of the war. An angel flies over the party, heralding the peace. At the head of the small group is an America, holding aloft a tomahawk and gleefully exclaiming their lack of loyalty to both Britain and the alliance. France is nonplussed (though happy for the steady supply of tobacco), while both Spain and Holland are intimidated by Britain, in the person of Jack Tar. 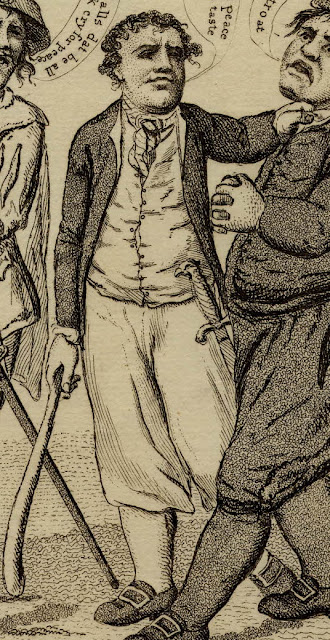 Our Jack wears no hat, and sports short curly hair. His neckcloth is striped and tucked into the single breasted waistcoat. His dark jacket is without collar or cuffs, and ends about the top of the thigh. Wide legged petticoat trousers run down to his calves, allowing us to see his white stockings and round toed shoes with rectangular buckles. In his right hand, Between he and Holland is a short sword with an eagle headed pommel.
Posted by Kyle Dalton at 8:00 AM