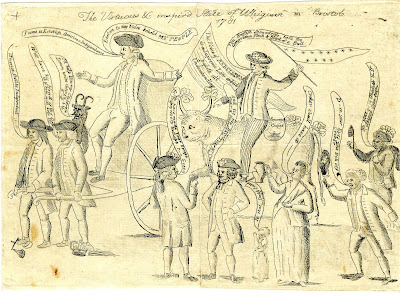 The Virtuous and inspir'd State of Whigism in Bristol 1781, artist unknown, 1781, British Museum.


This cartoon references the special election for a Member of Parliament for Bristol. The figure holding the striped American flag with the words "The Voice of Rebellion is a Supreme Law which passeth all Understanding" is Henry Cruger. 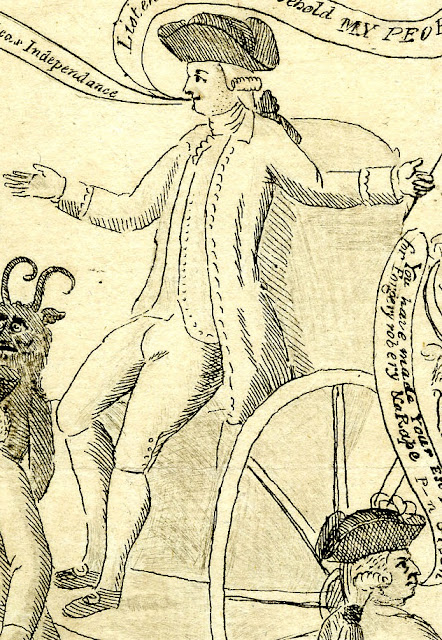 Born in New York, Henry Cruger was one of a very, very few American born politicians to actually attain a seat in Parliament. A radical supporter of the American cause during the Revolutionary War, he lost his seat in Bristol in 1780. According to the catalog entry for this piece at the British Museum, Sir Henry Lippincott, another Member of Parliament for Bristol, died shortly after the election. Special elections were called, and so Cruger ran again. His outspoken support for American independence is lampooned in this cartoon, and is only barely exaggerated. The British Museum states that Cruger ran up American flags on churches in Bristol during the election. 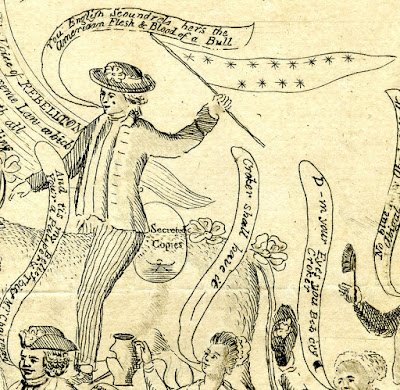 A sailor sits astride a decorated bull in a procession of Whigs, proclaims "You English Scoundrels hers the American Flesh & Blood of a Bull." He waves a pendent with thirteen stars, and sits in front of a bundle labeled "Secreted Copies." This bundle probably refers to the secret correspondence that Cruger was suspected of carrying on with his American counterparts.

Our mariner's outfit is clearly that of a sailor. A single breasted jacket that ends about just below the waist over a single breasted waistcoat is fitted with a short collar and plain cuffs. The sailor's round hat is bound with tape around the brim and the crown with a large rosette on the front. Beneath the hat is a bob wig with a queue. His trousers fit close to the leg with narrow vertical stripes.

In the end, Cruger lost his election bid. The people of Bristol elected him mayor that same year. He moved to the newly independent United States in 1790 and served in the New York State Senate.
Posted by Kyle Dalton at 8:00 AM