Army Proceedings or the Conjunct Expedition, 1741 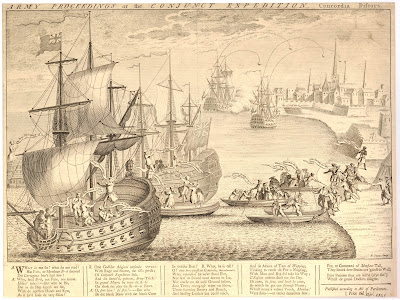 Parr's cartoon lambasts the British military, and the army in particular, for the utter disaster that was the Battle of Cartagena de Indias in modern day Colombia. Despite vastly outnumbering their Spanish foes, and being led by that legendary Admiral Edward Vernon, disease ravaged the expedition, and mismanagement led to an astounding defeat.

The particular event depicted here was the aftermath of a failed assault on Fort San Lazaro, also called Castillo San Felipe de Barajas. The fortress still stands today. After Vernon pounded the beach, clearing the way for the army to land, it was decided in a council of war to attack the fortress immediately. The only engineer on the expedition had been killed in earlier fighting, and so it was decided not to build sub-par batteries or conduct a siege with the forces that were already succumbing to disease. Led by General Wentworth, the attack would have to be conducted under the cover of night, or the batteries at Cartagena would doom them.

The Spanish Admiral Blas de Lezo anticipated the attack. He reinforced the garrison, cleared a field of fire, and dug an additional trench to further defend what was already one of the most impressive fortifications in the New World. When the British learned of this, they gave some of the Virginian troops packs of wool to fill the trench, and scaling ladders to climb the wall, further reducing the number of muskets they could bring to bear.

If all of this wasn't bad enough, the British were guided by two Spanish deserters, who intentionally led them directly into the Spanish field of fire. Delayed until the sun rose, the batteries of Cartagena joined the fray and Wentworth ordered a retreat.

It is this retreat Parr chose to represent in his cartoon. 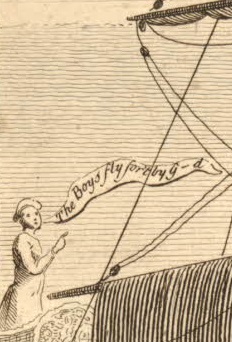 A sailor on the stern rail of one of Vernon's warships points to the scene while looking to the viewer, saying "The Boys fly for't by G-d." He wears a long jacket or coat without cuffs or collar, and a reversed cocked hat. This figure may be a naval officer, rather than a common tar. 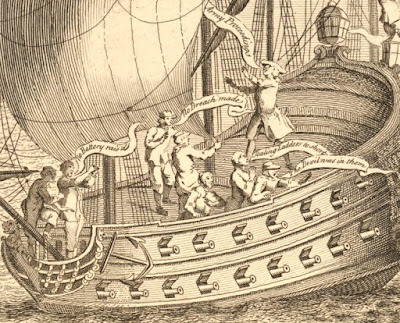 Sailing astern of this tar is a ship cluttered with sailors who watch the "Army Proceedings" with distress. "No Battery rais'd" cries one, "No Breach made" laments another. "Scaling Ladders to short," and "The Devil was in them."

The crew wear trousers that end about the top to the middle of the calf, single breasted jackets without cuffs or with buttoned mariners cuffs, short neckcloths tied close, work caps, and barge caps of the jockey style. Their captain wears his cocked hat reversed. 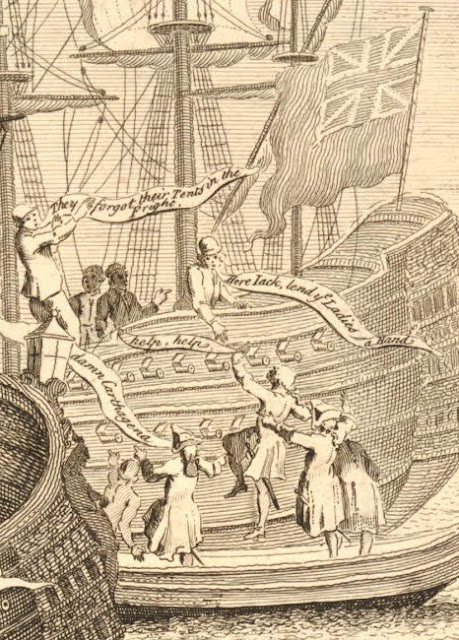 Astern of them is another warship, and up her sides clamber panicked soldiers crying "Help, help," and cursing "damn Carthagena." Reaching over the rail, a sailor in a jockey style barge cap condescendingly offers his hand with "Here Jack, lend ye Ladies a Hand." Another, similarly dressed sailor casts his eyes shoreward and announces, "They forgot their Tents in the Fright." 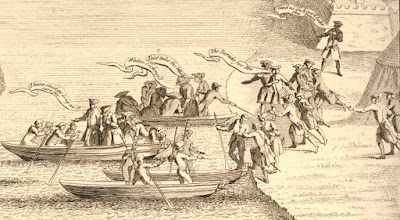 Scrambling into the boats, soldiers of the failed assault suffer from "Water Sickness" and confess "I have staid as long as I care for." The sailors wear cocked and round hats, but are otherwise wearing the same slop clothes as their mates offshore.
Posted by Kyle Dalton at 7:00 AM