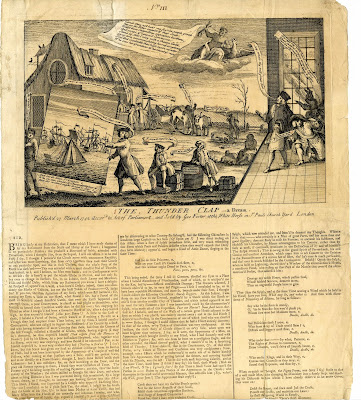 As in Samuel Lyne's Bob the Political Ballance Master, Forster takes aim at the Walpole administration with a political cartoon that skewers them on their failure to protect oceanic trade. Only in this piece, Forster accompanies it with a lengthy diatribe in text below. 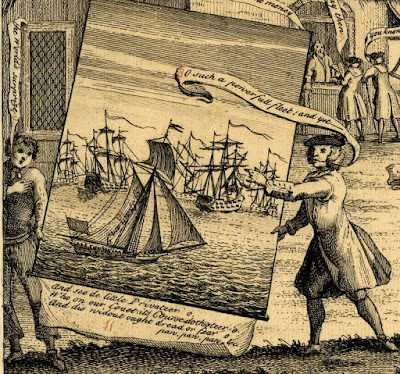 A master and sailor hold up a painting of a warships with their sails furled or turned away, and a slim privateer sloop crowded with men interrupting the frame. Pointing to the "Spaniard," a sailor (possibly a master) states "O such a powerful fleet : and yet -"

Just to be sure we don't miss his meaning, Forster has attached a short diddy to the bottom of the painting:

Holding up the other side of the canvas is a common sailor who comments "the world's surprize." His hatlead head is topped by a mix of curled hair, and around his neck is another short neck cloth. His single breasted jacket is tucked into trousers that run down to the bottom of his calf.
Posted by Kyle Dalton at 7:00 AM