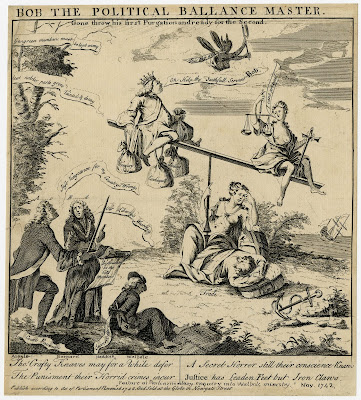 The Walpole administration was roundly thrashed by political cartoonists for their reluctance to start war with the Spanish, and then for their conduct of the War of Jenkins' Ear, War of Austrian Succession, and the litany of other intertwined conflicts.

Lyne joins the chorus of crtiticism with this political cartoon, which puts a good deal of emphasis on the failure to protect British oceanic trade. 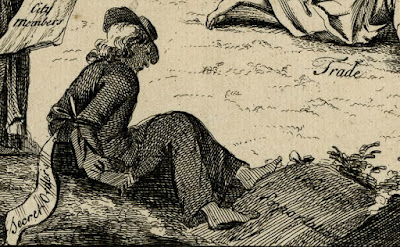 With his bare feet resting on a torn bundle marked "Wool for Exportation," a sailor is bound by the label "Secret Orders." As the curators of the British museum state in the catalog entry for this piece:


[This is] an allusion to the presumption that Admiral Haddock was secretly prevented by Walpole from taking action against the Spanish fleet.

The sailor wears a round hat with wide brim and narrow, conical crown. His jacket has slit cuffs, and his trousers are long and baggy, extending to his ankles. It is worth noting that this might be the first primary image I've seen that depicts barefoot sailors. It is a common assumption among naval historians that sailors were generally barefoot when at work aboard, but this is one of a very few that I've ever seen that depicted in art. It is worthwhile to question this assumption, and requires more research in fields beyond primary source artwork. 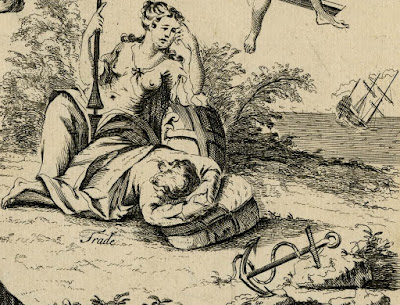 Sprawled at the feet of a disconsolate Britannia, a merchant sailor has collapsed over his bundle, and is helpfully labeled "Trade." Just in case we weren't getting the message, Lyne includes a fowled anchor with its line cut, and a sinking ship in the background.

The sailor wears petticoat trousers and a jacket with slit cuffs. Interestingly, he too is barefoot.
Posted by Kyle Dalton at 7:00 AM