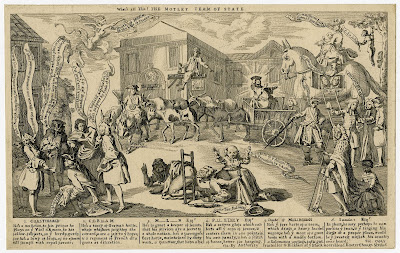 What's all This! The Motley Team of State, George Bickham the Younger, 1741, British Museum.

George Bickham takes up the same theme of chaos that Charles Mosley used in European Race for a Distance, the political cartoon that I featured in my last post.

Unlike Mosely, Bickham looks inward to Britain herself. Aside from general the general theme of war and disruption, he only similarity between What's all This! and European Race for a Distance is the figure of a sailor that Bickham clearly lifted from Mosley's earlier work. 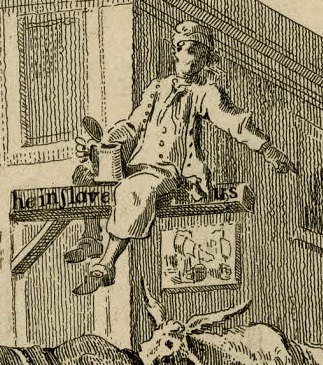 Their similar posture and the position of the mug are clearly the product of plagiarism. To Bickham's credit, he at least had the decency to change the copied tar's clothing.

His hat appears to be more of a cap, with an upturned brim that reminds me a bit of the caps the marines wore on the frigate Pallas decades later, as depicted by Gabriel Bray. The sailor wears a single breasted jacket and single breasted waistcoat, but they still hand like the smock of Mosley's original. Around his neck is tied a long neck cloth, hanging loose rather than tucked in. His trousers hang at the same length as the original mariner.
Posted by Kyle Dalton at 7:00 AM

Email ThisBlogThis!Share to TwitterShare to FacebookShare to Pinterest
Labels: 1740s