European Race for a Distance, 1740 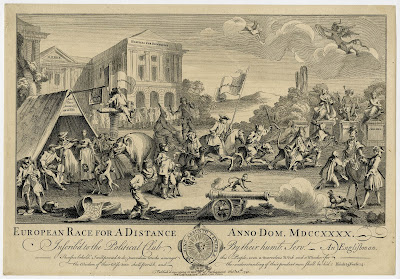 As I pointed out in my last post, 1740 was a busy time in Europe. War was spreading across the continent and across the world. Charles Mosley chose to depict the nations and leaders of Europe as jockeys vying for the prize of a bit more wealth and power.

A British sailor lights the cannon he sits astride with a linstock, holding his tankard in a free hand. He wears a work cap or round hat with short brim, a smock with neckcloth tucked into the front, and trousers that end about mid-calf. Over his head flutters a banner reading Pro patria mori, meaning "it is sweet to die for one's country." This may be a commentary on the impending death of the foolish sailor who lights the cannon between his legs, a metaphor for pointless death in the growing conflict.
Posted by Kyle Dalton at 7:00 AM