The European State Jockies Running a Heat for the Ballance of Power, 1740 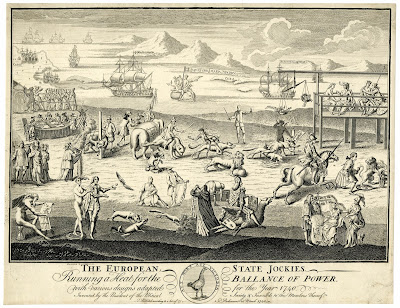 The European State Jockies Running a Heat for the Ballance of Power, artist unknown, 1740, British Museum.

The European world exploded in 1740 into a large conflict. The War of Austrian Succession subsumed the War of Jenkins' Ear and spawned King George's War, the First and Second Carnatic Wars in India, and the Jacobite Rebellion of 1745.

The unknown artist of this satirical print is trying to sort out all the events of 1740 into a single cartoon. His effort is crowded and confusing, but I'll focus on the sailors featured in this piece. 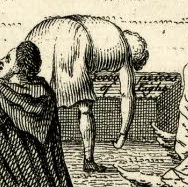 Naval warfare could be profitable. Our unknown artist depicts a sailor stooping to lift a chest marked "10000 pieces of Eight" plundered from the Spanish. He wears a pair of petticoat trousers and a close fitting jacket, but is without a hat. 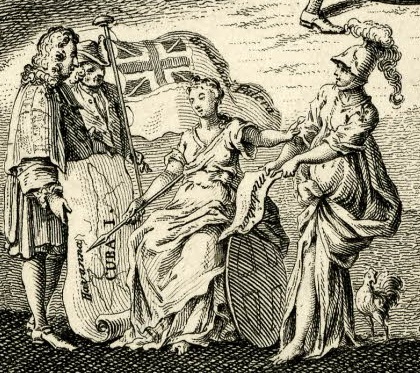 The artist put a but more effort into the meaning of this vignette. Britannia shoves aside France who points hopefully to a paper marked "mediation." Refusing peace, Britannia instead points to Havana with her spear. Havana would not be taken, though it was the site of a battle in 1748 that ended when word arrived that the war had ended.

Standing beside Britannia is a sailor clutching a naval ensign bearing the words Arma Pacis Fulcra, Latin for "Arms are the bringers of peace." He wears a white neckcloth and a single breasted jacket without collar. His cocked hat is point forward, over a bob wig.
Posted by Kyle Dalton at 7:00 AM