Earl of Cornwallis Bound to Bengal, 1783 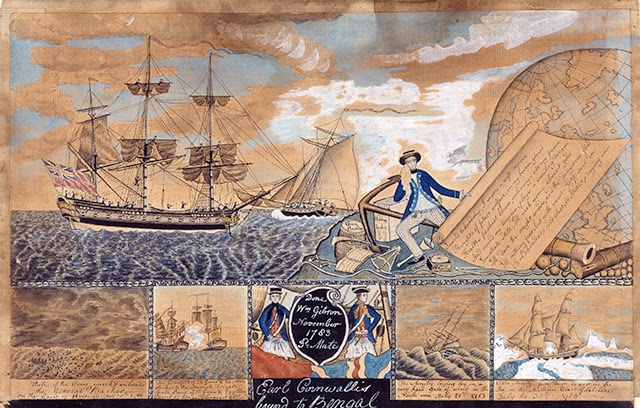 Here's a fun piece! It depicts the ship Earl of Cornwallis, which was launched the same year this image was made. She was a 774 ton merchantman that made several voyages for the East India Company, before conveying convict servants to Australia beginning in 1800. Aside from the Earl, there are a series of small vignettes along the bottom of the image, mostly depicting the disastrous fate of other vessels, like the Amity and General Barker. 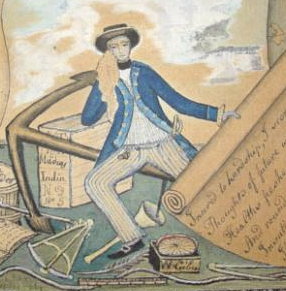 A well dressed sailor dabs his eyes, holding a scroll that I (unfortunately) cannot read. This sailors is the artist: William Gibson, third mate of the Earl. This is indicated by his fine dress and the instruments surrounding him. By his feet is a compass bearing his name, speaking trumpet, octant, quill, parallel ruler, and other items associated with navigation and command. Gibson wears a round hat bound in white tape, a white shirt without waistcoat, a blue coat with sky blue facings, and white metal buttons. His trousers are broad fall with narrow stripes (which appear to be blue, but I can't be sure) and a black neckcloth. Normally I wouldn't detail the uniform of an officer, but the dress of merchant officers is little represented in the art of the time, so this offers us a wonderful glimpse! 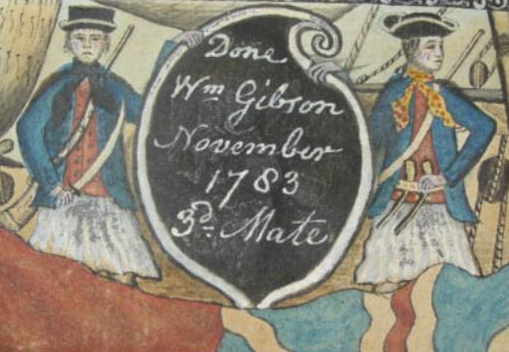 These heavily armed merchant sailors, standing over the red ensign flown by merchant vessels of the time, show how dangerous times were for British commercial vessels. On the right is a tar with a cocked hat bound in white tape, a yellow neckcloth dotted in red, a blue jacket, red waistcoat, and slops. White stockings are just barely visible between his slops and the ensign. Wrapped about his waist is a brace of two pistols, and slung over his back is a musket.

His mate at the left is in a round hat with a cylindrical crown and edged in white tape. A black neckcloth hands down over his double breasted blue jacket with mariner's cuffs and double breasted red waistcoat, both of which have cloth buttons. Just like his mate, he wears slops and white stockings. This tar's armament is a bit different from the other, in that he carries a musket and cutlass.
Posted by Kyle Dalton at 8:00 AM