An English Man of War, Taking a French Privateer, 1782 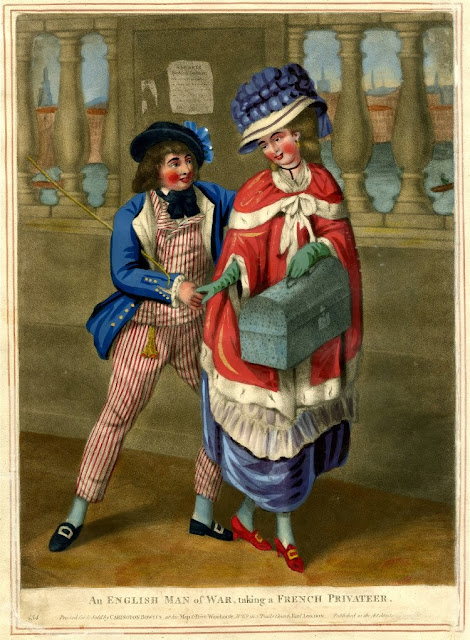 Yet another in the Bowles' series of sailors a-courting to the language of naval engagement, our splendidly attired jack does his best to capture the interest of a handsome French lady.

His black round hat has a narrow brim and a large blue bow on the left side. Jack's blue jacket is lined in white and bears brass buttons on its lapel and slash cuff. The neckcloth is tied into a preposterously large and elaborate bow at his neck, between the open ends of his double breasted waistcoat. Patterned with vertical narrow red stripes, the waistcoat matches his trousers. An elaborate gold fob peeks from under his waistcoat. His stockings are a light blue, and his pointed toe shoes bear rectangular white metal buckles.
Posted by Kyle Dalton at 1:17 PM