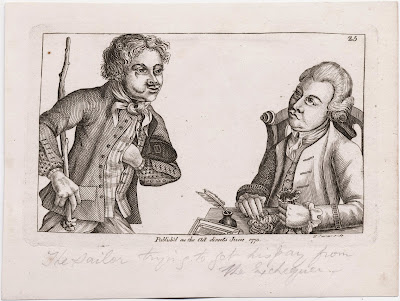 In an event celebrated in song and poetry, painting and print, a sailor tries to collect his pay from his most recent cruise. This print was part of a series by Thomas Sandars (or, as spelled on the print here: Sanders) exploring emotion. Some featured laughter, others anger, but this one is a bit more complicated.

Pay was a constant point of contention for sailors: the Royal Navy paid far less than merchant vessels would, piled deductions onto the tars, and hadn't even raised the monthly pay since 1660 (and still wouldn't for decades more). Here a sailor looms over the exchequer, who greedily clutches a purse close to his chest. 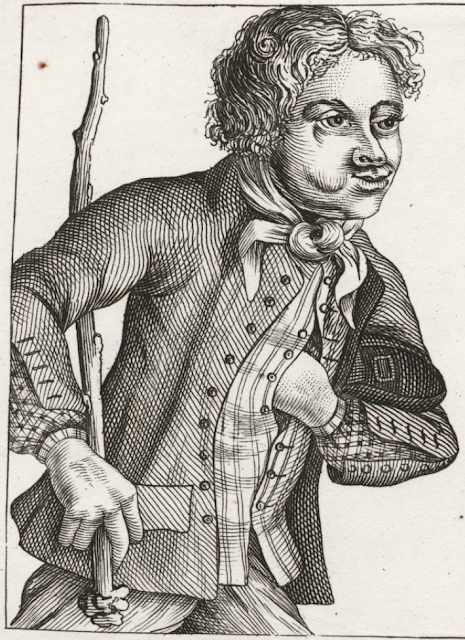 Jack has his hat tucked under his left arm, and it appears to be a round hat with a buckle at the crown, not unlike a Gabriel Bray painting I've featured here before. His neckcloth is white, and tied into a large knot at the front, draping over the jacket. The jacket is single breasted and unlined, with long slash cuffs left open, and flap pockets. The buttons at the cuffs appear to be cloth covered, but the lapel buttons are dark, perhaps horn or metal.

At first glance his waistcoat appears to be plaid, but closer inspection shows that the horizontal lines are actually creases and wrinkles, while the vertical lines are genuinely intended to be part of the pattern. Our seaman's shirt is clearly checked, and his trousers or slops are plain and loose. Under his right arm is tucked the trusty and familiar sailor's stick.
Posted by Kyle Dalton at 4:27 PM