Capt. Paul Jones Shooting a Sailor Who Had Attempted to Strike His Colours in an Engagement, 1780 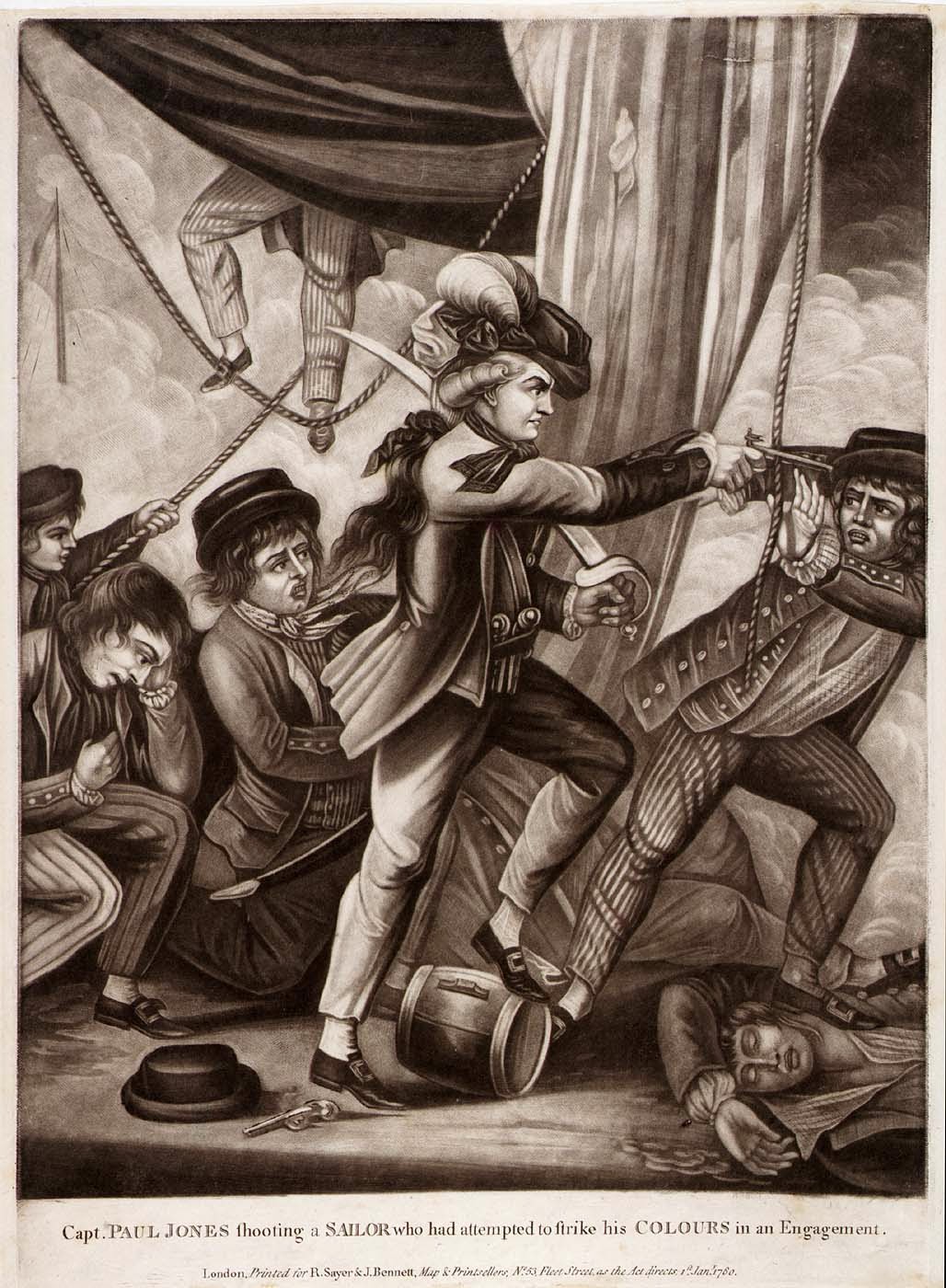 Capt. Paul Jones Shooting a Sailor Who Had Attempted to Strike His Colours in an Engagement, Sayer & Bennett, 1780, Smithsonian American Art Museum.

As I explained in the last image of John Paul Jones shooting a sailor, the event is based in reality, but is itself fiction. Though Jones attempted to shoot a subordinate who attempted to surrender the Bonhomme Richard to the HMS Serapis, he did not actually kill them. This is just another in a very long series (stretching well after his death into the nineteenth century) of British prints decrying Jones as a bloodthirsty pirate.

The figure that intrigues me the most is the fellow above and to the left, with his legs sticking out from behind the sail. It appeared at first that he was hanging down, perhaps wrapped in parted lines. His right foot, however, rests on what may well be footropes. Regardless of whether he is helpless or merely working, the sailor wears a pair of striped trousers, an unlined jacket that ends at about his knees, white stockings, and pointed toe shoes with rectangular buckles.

Below him and to the left is a jack hauling on a line. This seaman wears a round hat, black neckcloth, and jacket. In front of him is a distressed sailor, kneeling down and resting his bare head in his hand. His jacket has white metal buttons at its slash cuff flap. A black neckcloth is fitted about is neck and he wears a pair of striped trousers. The neglected round hat in the foreground is probably his.

To the right and kneeling along with his mate is a sailor in a round hat and light neckcloth with a pattern on it, though it is unclear what that pattern is. His jacket is lined, with flap pockets at his waist, slash cuffs with flaps and white metal buttons. A single breasted striped waistcoat is fitted beneath his jacket, ending at his waist and his plain trousers.

With a brace of pistols, Jones stands at the center, delicately balancing his foot on  keg of powder as he levels a pistol into the face of his target.

The victim of his attack attempts to flee. He wears a black round hat, a single breasted unlined jacket with slash cuffs and flap fitted with white metal buttons, a single breasted waistcoat of the same color as his jacket, checked shirt, striped trousers, white stockings, pointed toe shoes, and rectangular buckles.

In his panic, the sailor steps across the body of his mate. The dead tar wears a checked shirt and unlined jacket.
Posted by Kyle Dalton at 10:08 AM