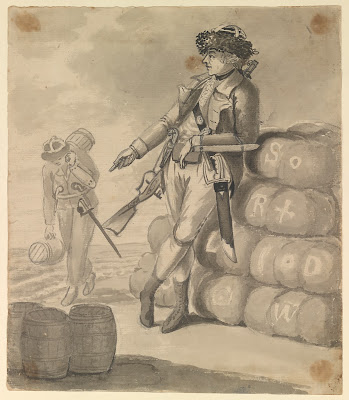 As I've said before, Bray is notable not just for his depictions of sailors and their everyday lives aboard a Royal Navy vessel in the late eighteenth century, but also for his representations of marines. This image is about as unique as any of his. The marine in the foreground bears some type of rifle with notches along its neck for an easier grip, and he has an oversized blade strapped to his belt, along with a pistol. The well armed chap also has something strapped to his left forearm that I haven't been able to identify, though I initially thought it could be a sling or brace for a broken bone. His hat is just as odd, and clashes with his ruffled shirt. For the marine, this image raises more questions than answer. 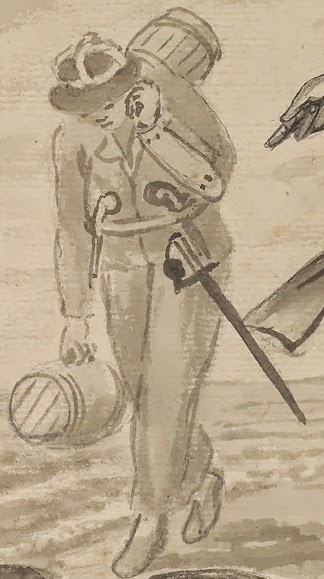 However, the sailor to which the marine points is our focus for this blog. He is also well armed, with two pistols at his waist, each with its butt turned out. At his left side hangs a cutlass with a "figure eight" guard that was typical of those issued in the Royal Navy. The tar's hat matches that of the marine: something like a Canadian fur cap, but with odd braces or tape along its crown. I haven't the slightest what to make of it. Otherwise he wears a single breasted jacket that is open at the top, suggesting that it is lined. His trousers are long, ending at the ankle, but we get no good view of buckles, or even if they are present. The shoes are rounded toe.

Here's where it gets interesting: he too wears a brace on his left forearm! Considering that he is using that arm to haul a wooden cask over his shoulder, it is unlikely that this is used for a medical purpose. What in the world is that? Any ideas?

EDIT: A friend of mine, whose expertise is fencing, suggests that the brace may be a "vambrace," or a type of forearm armor used in swordfighting. What do you think?
Posted by Kyle Dalton at 1:57 PM