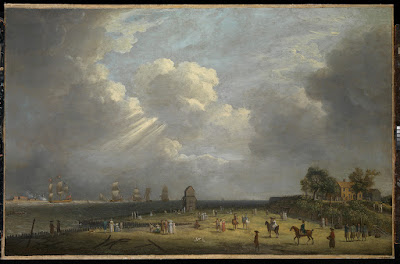 This land/seascape depicts the arrival of the German princess Charlotte for her marriage to King George III. The lavish yacht sailing into the harbor bears both her and the name Royal Charlotte. Crowds have gathered on the shore to watch and celebrate her arrival.

There are two versions of this image by Serres in the collection of the National Maritime Museum. This particular piece is a watercolor painted the same year as her arrival. Serres would revisit the piece in 1763 as an oil painting. I decided to use the watercolor because the colors are lighter and a bit easier to interpret.

The reason this watercolor is appropriate for our study is the small gang of sailors at the right of the image. There are four tars overall. Their hats are a bit difficult to interpret with the image's resolution, but we can say with some certainty that at least three of them are wearing cocked hats. The fourth (second from the right) might be wearing a round hat, but I could not say for sure. Three of the four wear blue jackets ending jut below the waist. The tars on each end have two vents at the back of their jackets, and the fellow on the far left has a slash pocket at his waist with buttons. The fourth mariner (second from the left) wears a brown jacket with a single vent and slash pockets at the waist. The second sailor from the right is the only one facing us, and wears no waistcoat. His neckcloth is white. All four sailors wear slops of various hues of brown and white, as well as white stockings.
Posted by Kyle Dalton at 11:35 AM