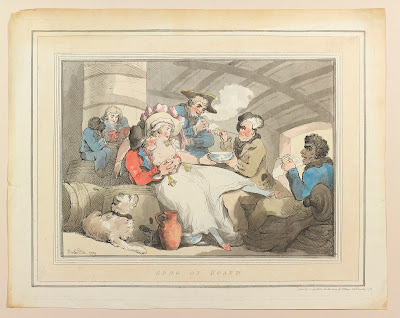 A group of tars is gathered about a rather buxom woman, sharing pipes and a bowl of punch. Familiar comforts abound in this piece! 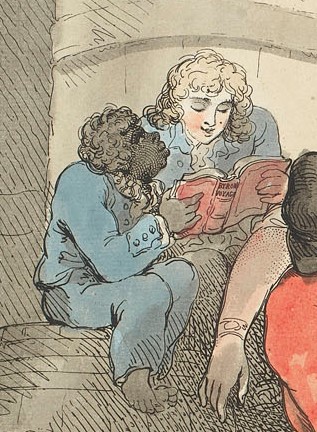 In the background an on the right are a pair of young jacks looking over a red book. Though the low resolution gives me some doubt, I believe the title reads "Byron Voyage." The chap on the left is a sailor of African descent, wearing a single breasted blue jacket with slash cuffs and cloth covered buttons. His neckcloth is striped, his trousers are (quite unusually) blue, and he wears neither stockings nor shoes. It is possible the fellow beside him is a midshipman: his jacket is also single breasted with cloth covered buttons, but he wears no neckcloth and his jacket bears a collar. 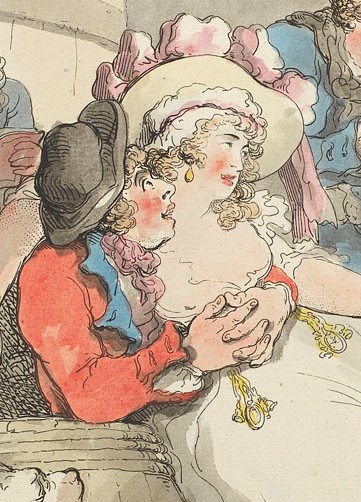 Embracing the woman with a wild look in his eyes is a sailor in a black round hat, a red jacket with blue lapels and slash cuffs, and a red or burgundy neckcloth. Behind the woman and puffing away on his pipe is a tar with a black cocked hat trimmed in gold with the point forward, a black neckcloth, and a blue jacket with cloth covered buttons and slash cuffs with flap. 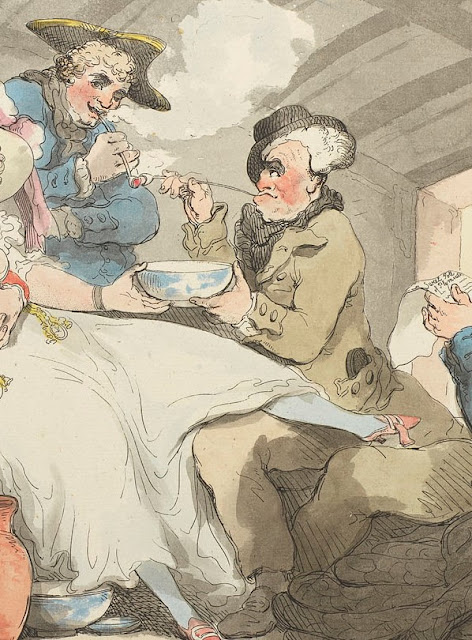 To the right of him is another jack, this one offering a bowl to the woman while lighting his pipe on his mate's. His jacket is cut much like that of the sailor embracing the woman, but is brown in color. It has odd waist pockets with large buttons, but with a box (possibly a tobacco box) protruding from that pocket, it is clear the buttons aren't actually clasping it shut. I'm not quite sure what to make of it. In any case, he also wears a black neckcloth, a pair of off white trousers, and rounded toe shoes with oval buckles. 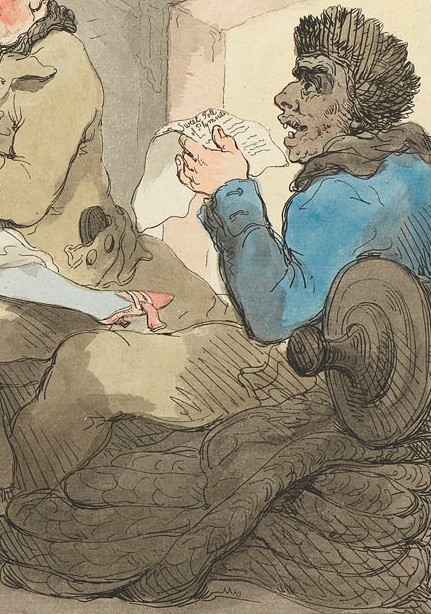 The furthest sailor to the right is the most wild looking of the lot. His hair is frayed, his teeth are few and far between, and his face is contorted into a bizarre caricature. Though turned away from us, we can certainly say his blue jacket matches the slash cuffs with flap that are on his mates' jackets, and his trousers are the familiar cut and color.
Posted by Kyle Dalton at 8:20 AM