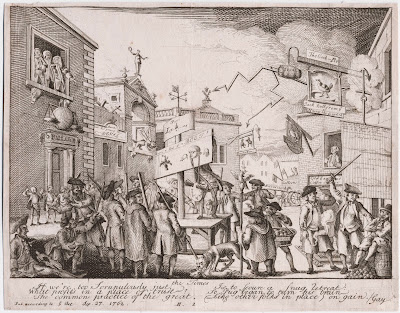 This print is an imitation of Hogarth's much more well known "The Times." One particular piece of the print confirms this: 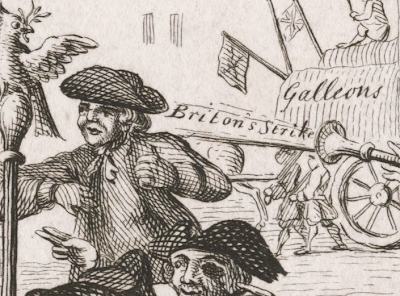 The wagon, under guard, is marked "Galleons." It represents the prizes taken by the Royal Navy during the Seven Years/French and Indian War. A nearly identical scene is in the background of Hogarth's "The Times," and in almost the same place: the mid-left background. Hogarth's version was more specific in labeling the wagon as bearing loot from the Spanish ship Hermione.

In the foreground of the wagon a rowdy sailor is starting some mischief, perhaps egged on by the trumpet blaring "Britons Strike!" Given the length of the rod that his target bears, I would guess him to be part of the Watch. He wears either a round hat turned up both front and back, or a reversed cocked hat. His jacket is without cuffs that we can see, and is open to reveal a plain shirt and neckcloth. 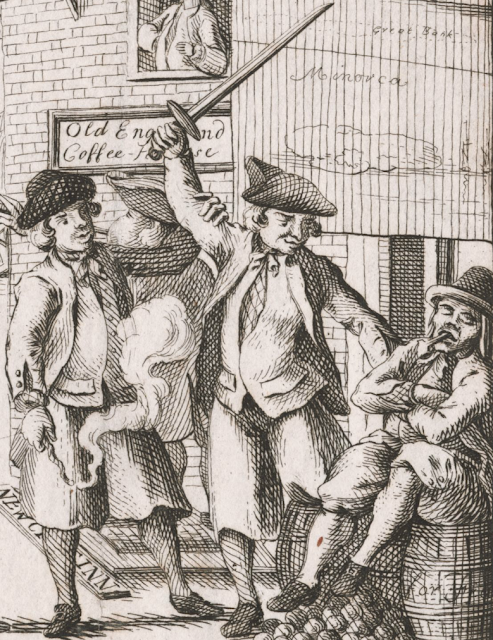 To the right of the brawling tar is another pair. One raises his sword to dash the sleeping Dutchman, but his arm is held by a shipmate. Behind them is a map of Minorca, an island in the West Indies taken by the French after they defeated the Royal Navy. This was the same battle that Admiral Byng shied away from, leading to his humiliation and execution.

The tar with the raised sword wears a reversed cocked hat, a remarkably short neckcloth, and a jacket with open mariner's cuffs. It ends about the top of the thigh. He also wears a single breasted waistcoat that is open to about halfway down, and bears flap pockets at the waist. Beneath is a checked shirt. His slops end just below the knees.

Steadying the arm of aggression, the other tarpawlin wears a darker hat, though I'm not positive as to its type. His jacket matches that of his mate, as does his single breasted waistcoat and slops. His right arm pokes out from under the mariner's cuff of his jacket, revealing another checked shirt. He too wears a very short neckcloth. 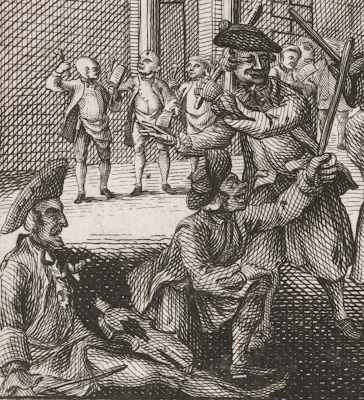 A dead fiddler lays propped up against the far left of the frame, and beside him a pair of ragged jacks who may have done the deed. The first kneels beside the dead man, wearing a round hat with an upturned brim, and waving his cudgel toward the figure at center. His slops are pulled back just enough to let us see his breeches, but not enough to give us any detail on them. He wears no waistcoat nor neckcloth. As with the others, his jacket's cuffs are opened.

The same is true of the tar behind him. Likewise wielding a cudgel, he wears a reversed cocked hat, and a suit of slop clothes that perfectly match the sailors to the far right of the frame, down to the checked shirt!
Posted by Kyle Dalton at 8:00 AM