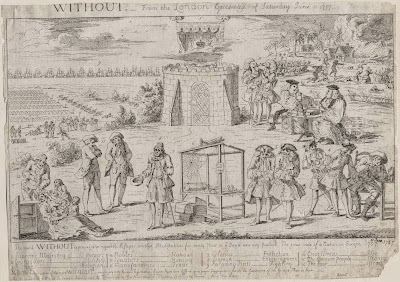 Ewart provides us a political piece decrying the state of the Empire in the midst of the Seven Years/French and Indian War. The title "Without" accompanies each figure in the piece, detailing what it is they are lacking. Some of the figures are without virtues: the nobles who lack honor, and the senators who lack honesty. Others are lacking more essential things: the colonies who lack protection, and the seamen lack "encouragement." 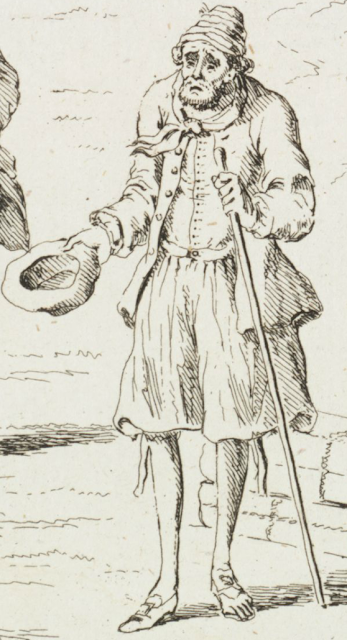 Certainly this Jack looks destitute. He wears a striped cap over his short and curling hair. His plain neckcloth hangs loose around his neck, framing the highly unusual beard. Beards were remarkably uncommon in the eighteenth century. This is the only image of a sailor to have featured it thus far in the hundreds I have examined. The beard probably exists to underline his utter lack of support: he is so poor and helpless that the poor fellow cannot even shave!

His jacket is typical for the period, hanging down to about the top of the thigh, with a single row of buttons, no collar, pockets, or cuffs that we can see. Our tar's single breasted waistcoat is tucked into his slops, which are themselves fashioned with a single button closure. Just beneath the slops are the strings of his breeches. His shoes are disintegrating from his feet, and we can clearly see his toes protruding from them. In his left hand is a tall walking stick, and in his right is a round hat held out for alms.
Posted by Kyle Dalton at 8:00 AM