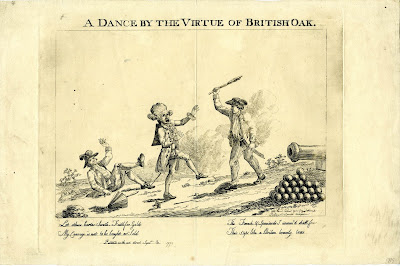 A Dance by the Virtue of British Oak, artist unknown, 1779, British Museum.

As we have seen (and will continue to see), throughout the 1770's and 1780's British sailors often acted as the embodiment of Britain itself in political cartoons. This was particularly true following any significant naval engagement. Here we see that theme again: Britain thrashing France and Spain, this time with a cudgel. 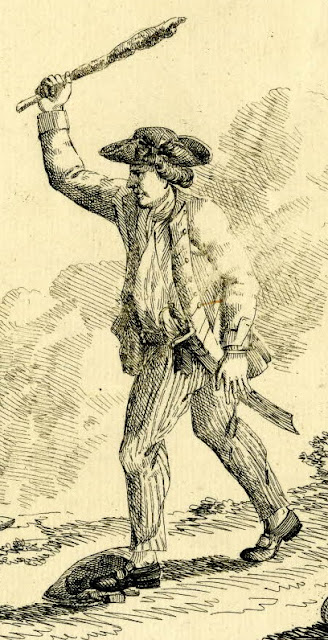 The Briton wears a cocked hat with a large and fanciful cockade. His hair is short and curled a bit. Hanging open, his jacket is double breasted with large lapels not unlike a military uniform coat. His neckcloth is the same color as his shirt, making them nearly indistinguishable, so we could conclude that the neckcloth is white or a similar hue. Jack Tar wears no waistcoat, and carries his oddly shaped sword on his belt. The trousers are decorated with narrow vertical stripes, and his shoes are rounded in the toe.

One of my favorite details is the discarded umbrella behind the Frenchman. English caricatures of the French often emphasized a stereotype of the French as delicate or feminine. The umbrella is a symbol of that.
Posted by Kyle Dalton at 7:20 AM