Paul Jones Shooting a Sailor who had Attempted to Strike his Colours in an Engagement, 1779 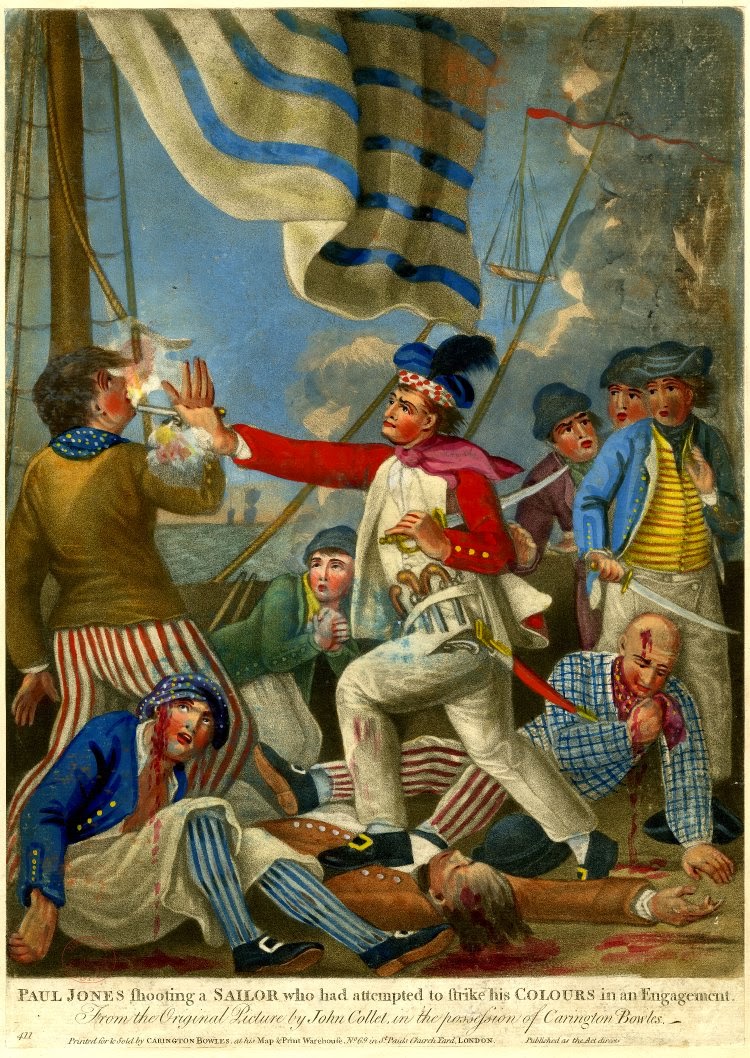 Paul Jones shooting a Sailor who had attempted to strike his Colours in an Engagement, Carington Bowles from John Collet, 1779, British Museum.

This is taken from an incident during the famous battle between the Bonhomme Richard and Serapis, in which John Paul Jones confronted two officers who believed that Jones had been killed and called for quarter from the Serapis. Jones shouted, "Who are those rascals? Shoot them! Kill them!" Jones drew a pistol on them, but it had already been emptied at the British sailors on the Serapis, and so he threw it at one of the officers, knocking the man out cold. The image of Jones (clad in Scottish regalia) shooting a sailor in the face for striking the colors is obviously exaggerated.[1]

Even so, we get a good number of sailors in this image, and plenty of sailor clothes to go around! 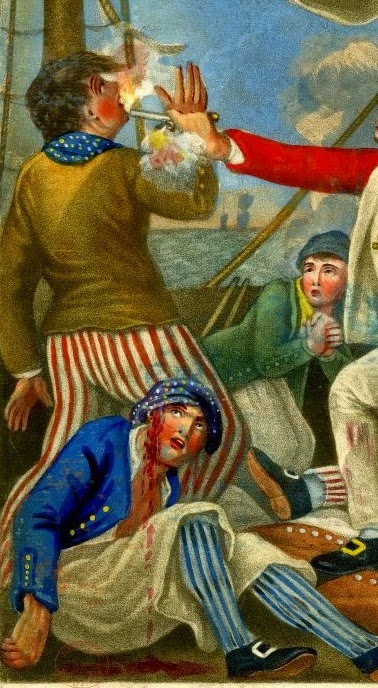 The sailor being murdered wears no hat at all, but short cut hair. His neckcloth is blue spotted with blue and yellow, a short jacket of brownish-yellow that ends at the waist with no vents, and brass buttons on his cuff. His trousers are stripped in red.

Beneath him (looking rather shocked at the crime), a tar wears a a bandanna of blue spotted with white and yellow. His neckcloth is a light reddish-orange, which helps to conceal some of the blood pouring profusely from his head. His blue short jacket is without a collar and single breasted with brass buttons on both his lapel and cuff. His slops are white, and he wears stripped stockings! It could be that this is more common than we think, though it doesn't show up very often in illustrations. His shoes are rounded toe with rectangular white metal buckles.

Behind Jones and to the left is a sailor praying for mercy with clasped hands. He wears a short cap, possibly a longer "voyageur" style cap, but more likely a Dutch/Monmouth knit cap. His jacket is a light green, with slash cuffs and cloth covered buttons. The neckcloth is yellow, and his trousers or slops (it's impossible to tell) are off-white. 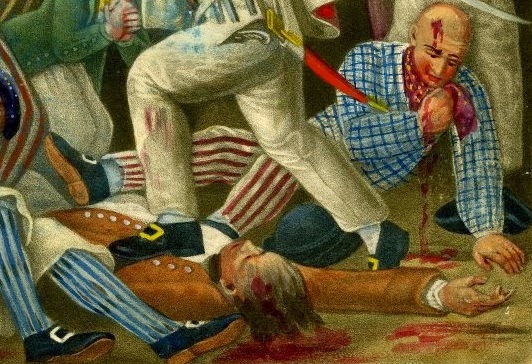 Beneath Jones' foot is a dead sailor with somewhat longer hair, though little more than shoulder length. His shirt (or waistcoat, the details are sparse) is white, and his short jacket is brown with white metal buttons.

Behind Jones is a bald mariner, mopping up the blood from his head wound with his purple and spotted yellow neckcloth. His shirt is white and plaid in blue, and his trousers are striped with vertical red lines. his shoes are rounded toe with rectangular white metal buckles.

Behind him, looking saddened, is a sailor (possibly an officer) clasping a short cutlass or long dirk. His hat is a round hat with the brim turned up on each side, and a few horizontal lines that I can't quite place. The hair protruding beneath is fairly short, and blowing in the breeze. His jacket is a lighter blue, ending below the waist and lined in white. The jacket buttons are brass on both the lapel and the cuffs. His neckcloth is black and tucked into his waistcoat like a cravat. The waistcoat itself is yellow with red horizontal stripes and cloth covered buttons, ending at the waist. His trousers end well above the ankle, and the fly is broad fall with cloth covered buttons.

Behind him, and looking quite perturbed, is yet another Jack. This one wears a Dutch/Monmouth knit cap, green neckcloth, and a purple unlined jacket.

Between them is a final figure, but we only see his head and black or dark blue knit cap.

It's quite a chaotic piece of propaganda, and remarkably colorful.

I should note that I've been avoiding examining officers clothing, so I'm not spending much time on Jones' outfit. Evan Thomas states that Jones despised the Continental Navy uniform and usually wore something closer to the British naval uniform in battle: blue uniform boat, white breeches, and white waistcoat. Almost certainly he didn't wear anything like that shown in this print during the famous battle.