The Invasion, part of the "England" series by William Hogarth, 1757, Wikimedia Commons.

I don't usually use images from Wikimedia Commons. It's a great source for period images, but reproduction rights are sometimes unclear. Hogarth's images are widely reproduced, and examples of this particular print can be found in many major institutions, including the British Museum. In this case, the Wikimedia Commons version was the highest quality reproduction I could find online.

Out front of the Duke of Edinburgh tavern, a jovial party of soldiers graffiti the wall with a caricature of the French king to the cheer of a tar. To the far right a recruiting party measures up a potential recruit, who stands on his toes to increase his chances of acceptance. Typical of Hogarth prints, it's a fun print with something new to find every time you examine it! 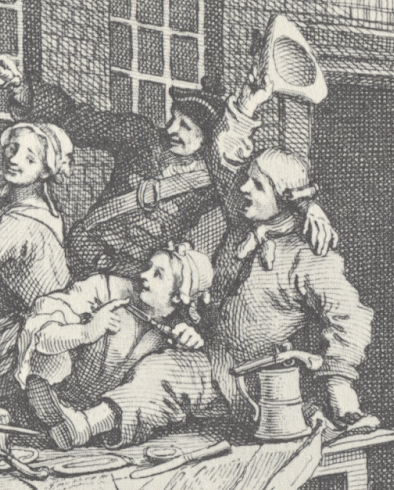 Sitting on the surface of the table with a lass in his lap (who points suggestively to a fork), the sailor raises his cocked hat in praise of the propagandist vandalism. Another soldier slings his arm about the sailor, pointing to the work of the grenadier with his sword.

Our sailor's hat has a cockade on the left side. His hair is curled on the sides, and appears to taper off behind the arm of the soldier, suggesting a queue. The neckcloth is very light, perhaps white. His jacket is single breasted and ends about the top of the thigh. As to his trousers, they are white or off white, and loose above the ankle. Beneath, his stockings are white, and he wears rounded toe shoes.

Hogarth's works are always fun to examine. If you look around a bit, you'll find a copy of the song "Rule, Britannia," a tavern sign of a wine glass and onion bottle, and some sort of plant hanging from the far end of the Duke of Cumberland's trade sign.
Posted by Kyle Dalton at 8:49 AM