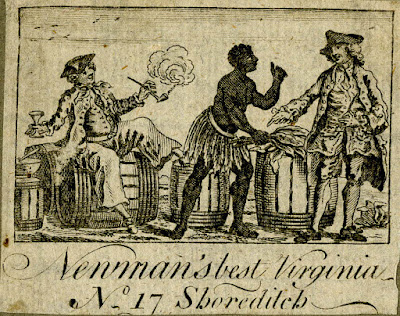 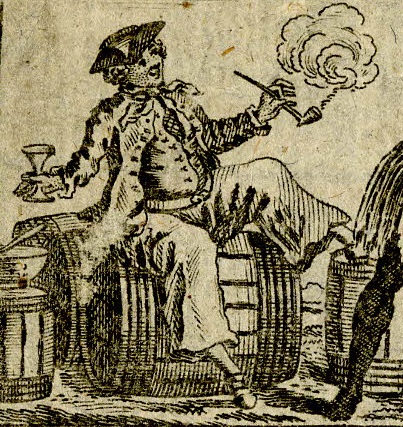 Jack's backward turned cocked hat is of a basic pattern, and appears to be without loops, buttons, or cockade,though this could be simply from the difficulty of reproducing such detail at so small a scale. This mariner's hair is very short, not even reaching to his shoulders.

Tied at his neck in a simple knot (probably a square knot) his neckcloth is of a light color and without any pattern. His single breasted waistcoat, ending at the waist, has several narrowly spaced buttons, likely cloth covered, though it is impossible to be certain. The waistcoat is open along the top, giving us a peek at the checkered shirt beneath.

His slops extend all the way to the mid calf, straddling the line between slops and trousers. They are wider and baggier than most trousers, but longer and more fitted about the legs than most slops. They are bound at the waist by a belt, rather than a button, and do not appear to have any fly at all. It is quite possible that this garment is the "missing link" between the two, which are so often conflated into the same garment in run away ads and the like. His shoes are pointed with rectangular buckles, and his stockings are without color.

His jacket is long and notably loose, with cuffs open. It is a single breasted piece, but we get no good view of the buttons themselves, and the ink has disappeared from one of the primary locations we'd look to for evidence of pockets.

I love the punch bowl, pipe, and wine glass combination! These objects dog images of sailors, and we'll see more of them in the future.
Posted by Kyle Dalton at 3:44 PM