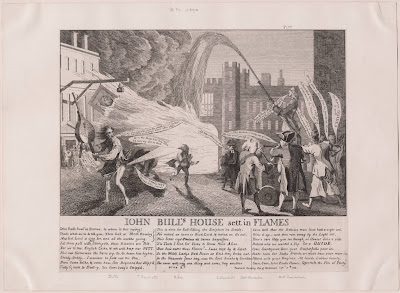 England's metaphorical house is burning, with the flames rushing from the door in a fierce blaze. Holding a bellows bearing the Woad, a Scotsman's kilt flies up as he attempts to douse the flames with his fart. There's a lot more going on in this image (the rat-man thing in the center, William Pitt directing the flow of water, the sign of the globe globe catching fire), but since we're focusing on the sailors beside the fire engine, let's see what they have to say about this:

"A fresh wind blow from aloft Jack," declares the one. "Fresh - I think it comes from a very foul quarter," quips the other.

Behind the engine and working the pumps are three sailors. One wears a reversed cocked hat, but there it too little detail on all but one of them to say anything more about their clothes.

The tar in the foreground wears a tall cap. Our seaman's jacket has a single vent at the back, and extends to the top of his thigh. We get no view of his neckcloth, shirt, or waistcoat. At his waist is a pair of petticoat trousers, ending about mid-way down the calf.
Posted by Kyle Dalton at 7:36 AM